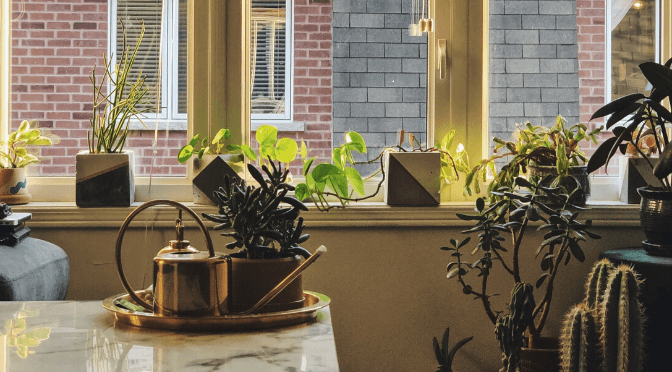 The 9 signs that your plant needs water are:

I talk a lot about how overwatering is such a massive problem to plants etc etc etc and now I’m worried that I’m discouraging you from watering your plants altogether.

The best (and most mentally scarring) way of thinking about the difference between over and under watering is think of it being applied to humans.

We’re told a lot about how quickly humans die without water. If you’re lucky, you can last a week, but generally, three days is your lot.

But three days is a long time to survive being under watered IF you compare it the human equivalent of being over watered.

Do you know long a human can survive underwater without an external breathing apparatus?

But the point remains – all life needs the correct amount of water. I talked a lot about overwatering, but today it’s underwatering’s turn.

Your plant’s soil is dry

I know I talk about moisture metres all the time, but they’re the best way for beginners to learn when to water their plants.

It would be nice if there was a universal number to water at, but different plants come from different parts of the world, and they need watering at different stages of dryness.

As a general rule of thumb:

After you become more acquainted with your plants you’ll rely less on your moisture metre, but they’re a godsend for beginners. You can buy them from Amazon for under a tenner.

Water is heavy, so there’s a distinct weight difference between wet and dry plants. After a while you’ll be able to tell if a plant needs watering just by picking it up. I know, I know, I was sceptical too, but it’s TRUE.

Th weight method os greating for plants that don’t mind drying out a bit, but ferns and calathea will not thank you for letting them dry out too much.

Your plant is drooping

If your plant is limp, a bit pale and drooping, that points to overwatering, but a plant that looks sad in posture only is probably thirsty. Again, moisture metres are invaluable for figuring out which it is, especially if you’re new to plant parenthood.

Some plants are renowned for being overdramatic when it comes to drooping. Peace lilies especially – you don’t need a moisture metre for these, just water as soon as they start to droop.

Syngoniums are also known to droop, however, they can tolerate drier conditions than peace lilies, so they only tend to droop when they’re seriously dry.

There’s nothing wrong with waiting for your syngonium to droop (or collapse entirely) before watering, but don’t panic if it takes 24 hours or more for your plant to stand up again.

It’s mad at you, and wants you to suffer.

Your plant is dropping leaves

In my experience, plants have to be SERIOUSLY dry before they start dropping leaves. Leaf drop is something that’s more common when plants are overwatered, so be sure you know which it is before proceeding.

If you’re waiting for your leaves to drop before watering – that’s too long. Yo should have watered as soon as the leaves started wrinkling, not waited until they crisped up and fell off.

There are loads of possible explanations for leaf drop, which you can read about here.

Your plant’s leaves are wrinkled

Plants with succulent leaves, such as hoya and er, succulents have wrinkled leaves in times of drought. Pothos and philodrendron also get wrinkly leaves too.

If you’re not using a moisture metre and you don’t have the pot weight think sussed yet, it’s advised that you wait until the leaves are wrinkled before you water.

Plants with succulent leaves tend to be far more tolerant of underwatering than overwatering, so waiting til their leaves are wrinkled can be good way of ensuring you’re not giving them too much water.

The leaves will plump up again pretty quickly.

Brown tips on the ends of the leaves

Brown leaf tips is another issue that has its own entire article.

Crispy tips is often a sign of lack of water, but it’s more likely to be a sign that your plant needs higher humidity.

I have a post on how to increase the humidity in your house here, but if you have a lot of plants and a lot of crispy tips, it’s far more effective to bite the bullet and get a humidifier. The Levoit one (you can get it from Amazon) is considered the gold standard of humidifiers amongst the house plant community due it’s capacity, ability to generate warm mist and medium price tag., but you can get cheaper ones.

If the leaves on your plant are turning brown, it’s almost always a dehydration issue, but check for bugs and bacteria anyway. Bugs will be visible if you hold your plant up to the window and look under the leaves, especially where the leaf meets the petiole. Bacteria tends to appear in spots.

Before soaking your plant, be sure to check that the soil is dry, using a moisture metre or a finger. Brown leaves could be a sign that root rot has progressed so far that your plant is dying, but that usually causes limp yellow leaves before they go brown and die.

In order for plants to thrive, they need plenty of light and water. Plants like succulents and cacti have a surprising capacity for water, especially in summer.

Whilst it’s true they like their soil to dry out completely, this may only take a couple of weeks when the weather is hot. It’s also important to give your plant enough water.

Make sure that the plant is thoroughly soaked, and that water is coming through the drainage hole. Remove any excess water from the saucer or drip tray, and repeat every time the soil is completely dry.

Succulents could probably survive being watered every other month and not show any ill effects, but once you start watering them more often, you’ll notice them growing much more quickly.

A lot of people say that overwatering is the most common way of killing plants, but I disagree. How many plants have been brought home from the garden centre, popped on a windowsill, and abandoned completely?

I hate the whole ‘this plant thrives on neglect’ rhetoric that I wrote a whole post on it.

But yeah, if you don’t water your plant often enough, it will eventually die. Even succulents. It just takes them longer because they have more water stored in their leaves and stems.

Having said that, don’t automatically assume your plant is dead before checking thoroughly. I wrote an article here on how to tell if a plant is dead. I have a Calathea that was eaten back to the top of the soil and I still have my fingers crossed.

I hope this list will help you in identifying thirsty plants. Get a moisture metre. Seriously, they make the whole process so easy. I know they’re not 100% accurate, but they waaay more accurate than my guesswork back when I was a plant noob.