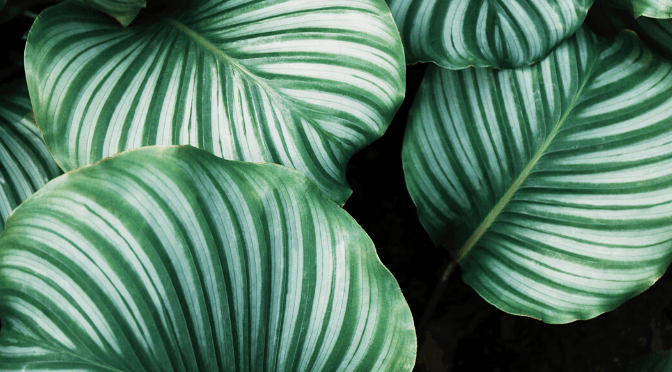 I kind of got into plants in the wrong order – I went all in on Philodendron first, purely because they’re low-light tolerant and aren’t fussy about watering.

I’d basically written off Calathea due to their slightly-more-fussy-than-philodendron nature.

But they drew me in. They’re just so damn beautiful. And then my local garden centre started doing Calathea bambinos, so each plant was only a couple of quid. Now I have an Orbifolia, a Lancifolia, a Musaica, a Triostar, a couple of others, and a couple of maranta that are similar in nature.

Oh, and my Calathea Leopardina, that is still thriving (despite the odd brown spot on the leaf) despite me over excitedly potting her in a terracotta pot. I don’t think she minds.

If you want to have a look at my collection, scroll to the bottom of my post for a look.

Anyway, I believe that anyone that either lives in a humid home like me, or will invest in a humidifier, can grow a Calathea, and have it look healthy. You just need to be diligent and keep a freaking eye on the soil.

I’m including all the Marantaceae family here. They all require kind of the same care, though some are more finicky than others. I wish I could tell you which are finicky and which aren’t but it depends on the individual specimen and the conditions in your home. Sorry.

Oh, and I’ve just discovered that some people call Calathea Goeppertia. I think they’re synonyms for one another, rather than separate plants.

Calathea don’t like to dry out. Make of that what you will. If you’re someone that loves to shower your plants with love (literally) and give them lots of water, then you may get good results with Calathea.

At the other end of the spectrum, if you’re likely to forget to water your plant for weeks on end, maybe it’s best you stick to the philodendron.

Calathea won’t tolerate being sat in the water though – few plants do, with exceptions being carnivorous and other bog plants.

I like to water my Calathea when the moisture meter reads about 4, but it’s not too big a deal if we get to 3. Let’s try not to get it any lower than that because that’s when we start getting crispy leaf tips

I wouldn’t advise that you water your Calathea with tap water – they’re not at all keen on the minerals and salts that are present. I use rainwater from buckets I leave outside in the garden (a pretty slick system, though I do say so myself).

I have used tap water in the past and none of my Calathea have died, but I’m pretty sure it’s responsible for the brown spots on the leaves of my Leopardina.

If you don’t have the means with which to collect rainwater, then use filtered water (from a Brita filter), but make sure it’s at room temperature or above – we don’t want to shock the plant. If you can’t stretch to filtered water, then try adding a bit of fish dechlorinator to your water. I have no idea how effective it is, but surely if it doesn’t kill fish, it’ll be fine for plants?

What level of humidity do Calathea need?

Calathea come from the tropical Americas, so it’s fair to say that they like it humid. Like I said, my house is naturally humid (trust me, it’s not a good thing. I have to run a dehumidifier to get my humidity down to 65%).

But it does mean I don’t need to run a humidifier. If you’re in the market for one though, the one I recommend is here. Although I’ve not used it personally, it’s the one I see being commonly recommended by other plant bloggers.

If you don’t provide enough humidity for your Calathea, you can end up with crispy leaf tips, brown spots on the leaves, and sometimes even plant death. They’re a fairly overdramatic plant.

Calathea will tolerate a fairly wide range of temperatures, though once we get to about 15 degrees C (apologies, I can’t find special characters on Gutenberg) they’ll start to be a bit unhappy.

Since they’re from the rainforest they’re ok with warmer temperatures, so long as you keep the humidity up and make sure their soil doesn’t dry out.

That being said, Calathea do NOT like draughts, so make sure they’re not in the path of any regularly opening doors or windows.

Calathea are fussy about most things, apart from light. The dappled light they’d receive on the rainforest floor means they’re happy in medium light, but don’t mind a bit of bright, indirect light.

They won’t tolerate a lot of bright light and can succumb to sunburn quickly, so be careful of this if you live in a hot country.

Here in sunny North Yorkshire, my Calathea like to sit on the open shelving in the kitchen opposite a south-facing (but the sun is blocked by a house), textured glass window. A few others are on the hearth (I don’t light the fire; they wouldn’t like that at all).

When I say they ‘like’ sitting there, I actually don’t care if they like it or not. They grow there, is what I mean. And apparently don’t know/care that it’s winter, because they’re all growing like stink.

TOUCH WOOD, I’ve never had an issue with mealybugs on plants, but apparently you have to watch out for those little critters.

I have, however, had aphids. The aphids originated, I believe, from my string of pearls, which I was so excited to find in a shop that I neglected to realise what awful condition it was in. Fast forward several months and it’s looking better, but it’s given aphids to a few of my gang.

The fact the aphids came from the string of pearls and bypassed a few other plants to get to my Triostar suggest that aphids are fans of the maranta family in general. I had to pick one off my Rattlesnake plant too.

To get rid of the bugs I just pick off the ones I can see and then spray the plant down with a water/neem oil mix.

From a bit of googling, I’ve discovered that scale insects are a major bugbear (wheey) of Calathea. Scale are a nightmare to get rid of, so I’ll keep a close eye out for that.

Propagating by division is apparently the easiest way to propagate Calathea, though, to be honest I’ve not tried it myself I got into Calathea at the end of September, and it was a bit much to ask them to propagate then.

The basic method is to take the plant from the pot, remove as much soil as you can, and gently tease the roots apart. I only ever propagate when there are two separate plants, but some plants are happy to be literally chopped up.

I wouldn’t like to say either way with Calathea, because some species are far more resilient than others. My Leopardina wouldn’t give a fuck, the Orbifolia would probably die on the spot.

You can take cuttings from some Maranta, just be sure that you’ve got a node so that the roots have somewhere to grow from. My research suggests that rooting hormone is useful, and that cuttings should be put in soil rather than water.

What should I pot my Calathea in?

Calathea like a well-draining mix that retains a bit of moisture. So do most of my plants. So they pretty much all get the same mix.

I like to mix two parts house plant potting mix with one part orchid bark and one part perlite. You can add things like worm castings too, if you want that bit of extra nutrition.

You know, I’m seriously considering a worm farm next year, so I have increased access to worm poo. Topdressing the soil with castings just seems easier than having to remember which plants need fertilising when. Let me know if anyone’s had any success with worm farming.

It’s not great to plant your Calathea in terracotta pots because they can dry out too quickly. However, my Leopardina is in terracotta and she seems fine – she doesn’t dry out any more quickly than my other Calathea.

Calathea aren’t big fans of being repotted at all, so it advisable to keep them in their nursery pots for as long as possible, and only repot them when they’re bursting out.

They’re considered non-toxic to dogs and cats and they’re DEFINITELY non-toxic to huge, aggressive bunnies that weren’t put away properly at night.

Izzy has eaten half on a Calathea Orbifolia and an ENTIRE Calathea Medallion. And by entire, I mean there were only stems left. And they were a BIG plant. My amazing boyfriend replaced it though.

Izzy was 100% fine, and clearly thought it was absolutely delicious. Far more delicious than the other Calathea and the Maranta that were next to them, largely untouched.

Why does my calathea have crispy tips?

This is usually a humidity issue. Get a humidifier. You can often get discounted Calthea in shops because the air is too dry and calathea went crispy. If you can provide 60%+ humidity, buy that sucker, snip off the crispy bits, and hope.

Why did my calathea die?

Ooo let me count the ways a Calathea can die.

Why do calathea leaves curl?

Leaf curl is usually a response to too much light or too high a temperature. Their natural environment is the relatively cool and dark rainforest floor.

Why do Calathea leaves close at night?

Actually, not all Calathea do ‘pray’ – it’s their close relative maranta that are more likely do so, and it’s a basic light response. They have a joint between the stem and the leaf which allows them to open during the day.

We don’t really know why they do this, but it’s generally thought that they close at night so that rain won’t catch on their leaves and encourage fungus, and then they open in the morning to increase light exposure.

In case, you know, you’re interested. I’m including my Ctenanthe, Stromanthe, and Maranta too, because they’re all family, and require *broadly* the same care.

Calathea may seem finicky (and they can be) but I find them very rewarding. It’s November now, and my Calthea Orbifolia is shooting out a new stem and I’m very excited. (ed: lol lol lol the rabbit fucking ate it) (ed 2 : it put out half a leaf, with a little nibbled edge)

If you’re serious about keeping Calathea, I’d definitely invest in a humidifier, rather than wasting your time with pebble trays and misting.

If you think you’d keep up with misting and refilling the tray, give it a go by all means, but you’re just giving yourself more work.

A humidifier will take all the guesswork out of it AND will benefit you too (dry air’s not good for sleeping in, apparently).

I’m a fan of massive, full Calathea so next year I’m going to buy a few more of each of the plants I already have and pot them together to make bigger plants. It’s a cheaper (or quicker) way to get statement plants quickly.

Feel free to add any additional Calathea care tips in the comments. Thanks!