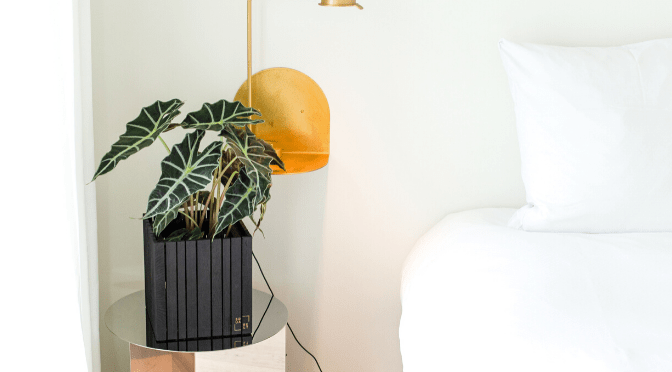 Another day, another way of defending ourselves from the onslaught of fungus gnats.

There was a time last spring when I couldn’t eat ANYTHING without one of the little buggers trying to get into my mouth (what part of vegan don’t they understand??).

Don’t even get me started on wine. Fungus gnats are crazy big drinkers.

But recently, they’ve been quiet.

Either their new year’s resolution was to keep to themselves a bit more, or my almost exclusively bottom watering regime has paid off.

I’m leaning towards the latter. If you want to read more about the benefit of bottom watering I have an article all about it here.

But I’m lucky. I have a big enough kitchen* to be able to set up a bottom watering station. A lot of us need to water from the top just for the sake of convenience, especially if we have a lot of plants.

The problem with top watering is that the top of the soil gets wet, which attracts fungus gnats. Gnats aren’t too much of a problem (unless you have a full-on infestation) but they’re irritating as hell.

Beneficial nematodes have been used to get rid of pests for yonks. I first heard about them when I watched this Betsy Begonia video, and thought I’d write a post based on my research, to provide a guide for those of you with a gnat problem.

*My kitchen is actually pretty small, but it’s an L shape, due to a tiny little extension that houses the freezer, washing machine and boiler. Also a worktop and a textured south-facing window. Perfect for plants.

What are beneficial nematodes?

Is everybody ready for a really long and gross word? Great. Beneficial nematodes used in plant care are two species of entomopathogenic nematodes commonly known as heterorhabditis and steinernema.

Imagine tiny weeny white worms. That’s pretty much what they look like.

Prepare yourselves, because this bit’s gross.

The beneficial nematodes enter the fungus gnat through any available orifice (or failing that, right through the side of their body) and poison it, by releasing bacteria from their gut.

At first this may seem mean and disturbing (and it is), but the beneficial nematodes aren’t just doing this for a laugh. The purpose of killing the host is to provide the nematodes with something to feed on.

How long does it take for beneficial nematodes to kill fungus gnats?

It takes 24-48 hours for the nematodes bacteria to cause the host fatal blood poisoning. Pretty speedy then. However, it can take a couple of weeks for your gnat problem to be under control.

The length of time it takes for the nematodes to kill pests varies due to factors such as the size of the pest, the size of the infestation, and the environment they’re in. Nematodes are sensitive to ultraviolet light and temperature.

It’s recommended that two doses of beneficial nematodes are given, a week or so apart, to make sure all gnats are eradicated.

What are the advantages of using beneficial nematodes over other methods of fungus gnat prevention?

Are there any disadvantages of using beneficial nematodes?

Whilst there are many disadvantages to using beneficial nematodes outside, such as:

These don’t really affect those of us using beneficial nematodes specifically on house plants, where the pretty constant environmental conditions provide an artificial environment for pests, so there will probably always larvae in the soil.

The storage issue is probably more for people with massive gardens that need to bulk buy. We can just keep our little packet in the fridge.

The only issue I can really find with using beneficial nematodes to get rid of fungus gnats is that they die in dry soil, so keep your cacti and succulents away from your other plants so that they don’t get re-infested once they dry out.

Since fungus gnats also don’t like moist soil that shouldn’t really be a problem after the initial application.

How to use beneficial nematodes on house plants

Your packet will come with instructions, but it’s…kinda like applying fertiliser. The nematodes usually come on a little sponge. You run water through the sponge and into a watering vessel. Then water your plants with the nematodes, then again with clean water to really work them into the soil.

I’d have thought they’d wash out, but I am not a nematode expert. Just follow the instructions.

Where can I get beneficial nematodes?

Your local garden centre probably, but Amazon sell them too.

Christ, you buy them by the million. How creepy is that??

Would I use beneficial nematodes?

The main reason I personally wouldn’t bother with beneficial nematodes is that they have a similar effect to diatomaceous earth – they get rid of pests by killing the larval stage that’s in the soil.

It just seems a lot of trouble to go to for a few gnats. THAT BEING SAID, if you have a full-on gnat infestation, you’ll probably be grateful.

I’m not sure whether I’d go for diatomaceous earth or beneficial nematodes. If I was treating my garden for pests, nematodes seem to be the way to go, but inside…I dunno. It seems..wrong…to intentionally unleash literally millions of roundworms into my home.