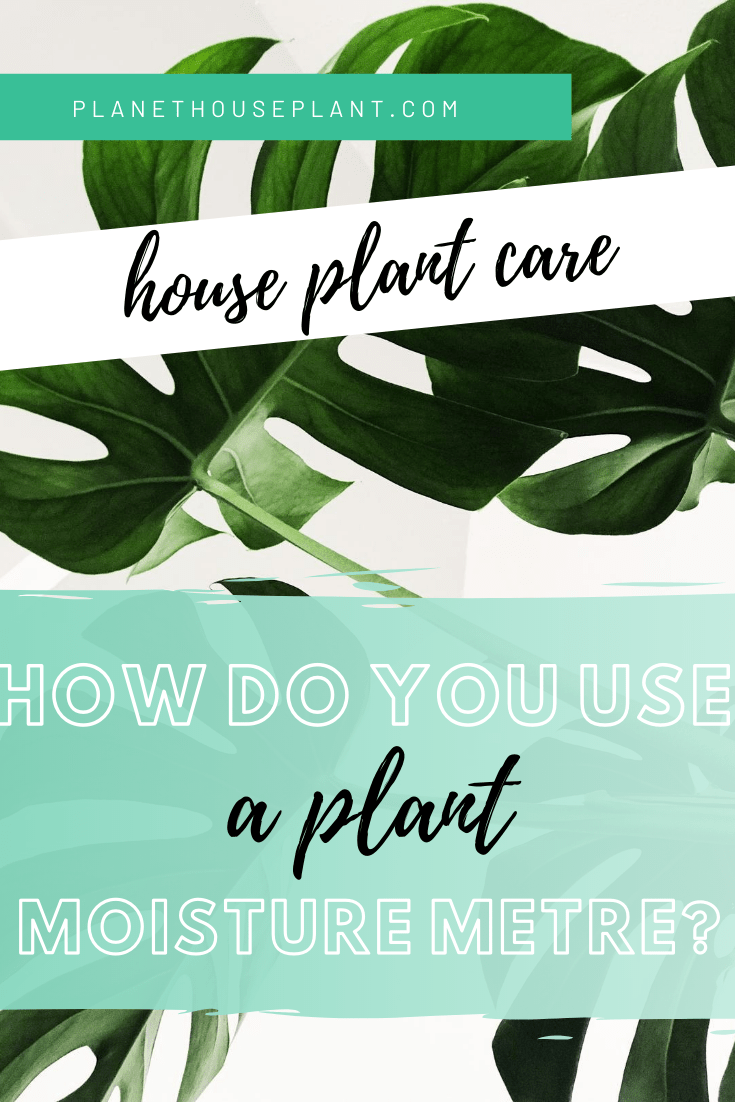 This article talks primarily about moisture metres (you’ll learn more than you ever wanted to know) but I also discuss why I’m scared of plastic bags and why British people are allowed blowdryers in the bathroom.

I’m a huge advocate of using a moisture metre for plants.

This isn’t from any scientific analysis of accuracy or anything – it’s 100% from experience. Using a moisture metre took me from bonafide plant killer to a plant parent to hundreds.

Many plant parents claim that moisture metres are inaccurate, and that you’re better off learning how to check your plants and soil for signs of drought in other ways.

I agree with some of that – moisture metres can be inaccurate, and there are better ways of ascertaining whether or not your plant needs water BUT it’s the easier way for beginners to stop overwatering.

And for the price (under £15, often less), you may as well add one to your arsenal.

This is the one I have and recommend:

The ones with two prongs are marketed as multifunctional (they can also measure light and pH).

Theoretically that sounds great, but even without measuring how accurate they are, I find moisture metres with two prongs to be messier than a single pronged one.

They fling the soil around a lot more, and you’ve double your chance of skewering a root.

(btw, skewering roots isn’t a big deal in plants – I probs do it every time I water them, but I think being skewered twice is a bit much).

How do you use a moisture metre?

Stick the pointy end in the soil.

Best practice is to take readings in a few different spots, but I’m too lazy busy to do that. If you’re busy like me, stick the, er, stick as close to the root ball as possible.

Sometimes you might find that the outlying soil is dry but the root ball is till soaking. I’m talking some parts being 1 (drrrry) and others being 10 (sodden).

How accurate are plant moisture metres?

When I first got into plants, my moisture metre was really accurate. My plants were all potted in either the soil they came in or neat potting mix from the garden centre.

This is perfect for moisture metres but not so much for plants.

Hopefully by that time you’ll have more of idea what you’re doing, and will be using your moisture metre as a second opinion, not a bible.

I’m sure you could shell out on a fancy-pants one, but the cheapo one I recommends works best on dense soil (I assume because there’s more contact between the soil and the metal).

One of these days I’ll buy a few different metres and see if I can buy my way to 99% accuracy. I’ll keep you posted.

Do I need a moisture metre?

I wouldn’t be without mine, but they’re not mandatory, especially if you’re not new to plant care.

But if you’re new, or lean to towards overwatering, I urge you to get a moisture metre.

When I was new, I was assuming I’d need to be watering plants at least every two weeks, but it doesn’t work out like that.

I have a Ctenathe lubbersiana that likes to be moist at all times. From that description, you’d assume I’d be watering, what, weekly?

I water her maybe every month, if that. She takes a while to dry out. If it weren’t for my moisture metre, she’d be dead by now.

So many things influence how often you need to water your plants. You may have a plant near a window that needs watering monthly in May but every four days in July.

A monstera that needed water monthly indoors may need it daily outdoors.

A moisture metre will help you keep your plants alive in the interim between getting into plants and learning how to tell what they need by eye (or finger).

And even when you’re more experienced, it’s always a good idea to get a second opinion.

How often should I check my plants with a moisture metre?

When I first got into plant care, I checked them every day, for a couple of reasons.

That was all very well when I had 30 plants, but now I have 100+. I check my plants weekly-ish, but sometimes leave it longer.

I have a more seasoned eye now, so I do a quick scan of each room a few times a week and water whoever looks thirsty. I still use a moisture metre on the plants that are still in their nursery pots because they have pretty dense soil.

How do I check my plants need water?

I pick them up and see how heavy they are.

This works perfectly on most of my plants. The only ones I need to double-check are those that are in terracotta and like to stay moist.

Top tip: don’t put plants that like moisture in terracotta.

Learn from my mistakes.

I have a fern in terracotta that needs watering all the damn time, but every time I try to repot it in plastic it has a hissy fit.

Trust me, after a few months of plant care you’ll be able to tell the difference between the weight of dry plant and a wet one.

When to water plants based on moisture meter readings

I toyed with idea of putting two numbers here – the ideal number to water at and the lowest a plant can tolerate getting to.

But realistically, you’re going to forget a plant and have it dry out completely, and I don’t want to to panic. I’ve let Calathea get to 1 on the moisture metre and they’re been totally fine.

Ok, I’ve let every single one of my plants dry out WAAAAY too much and never lost one to drought.

Except maybe my asparagus fern, but the jury’s still out on a) whether or not it’s dead and b) cause of death

These are guidelines. There are no right answers. This is just what I’ve found works for me.

Please let me know who I’ve missed out.

What I’m gonna say next is controversial, but it’s a good rule of thumb if you bought a lot of plants during lock down and are feeling overwhelmed with numbers:

Water all your plants at 2 except your succulents. Wait until 1 for them.

You can learn more when you’re more settled.

Can I not just use a self-watering pot?

But if you’re new to plants, you’re likely to overwater your plants if you use a self-watering pot, so I’d stick to normal pots.

If you do want to try a self-watering pot, I’d use a lay of leca at the bottom. Leca is clay pebbles that absorbs water (so not the same as putting a layer of gravel down) and will stop the soil getting too wet.

I’m currently testing out growing plants 100% in Leca, which takes all the guesswork out of watering (when water reservoir is empty, add water. Done) but takes a bit of prep to get started.

I’ll do a post when I know what the hell I’m on about.

How do moisture metres work?

Full disclaimer: I had to google this just now. I always just assumed it was, I dunno, magic?

Basically, the metre measure the electrical resistance between two electrodes. The more resistance there is, the less moisture is present.

Because water conducts electricity, and that’s why I can’t turn lights off with wet hands, because my mother told me I’d have an electric shock and die.

To this day I can’t believe Americans are allowed electrical outlets in the bathroom and casually do things like use blow dryers in there. Here in the UK we’re not allowed.

Boring fact: here in the UK we have much stronger mains power than in the US (that’s why we have kettles – they’re far more efficient than using the stove to heat water, but in US they’re pretty much the same) because APPARENTLY it’s safer.

But we can’t be trusted to have electrical appliances in the bathroom.

I mean, she’s kind of right, but the way she explained it (or the way my childhood brain interpreted it), touching a light switch with wet hands = instant death.

I also believed that putting a plastic bag on your head = instant death.

I was a very nervy child.

So the reason airy potting mixes result in less accurate readings, is that the metal isn’t touching the soil enough, so the two electrodes will be less able to measure resistance accurately.

What is the best moisture metre for house plants?

In my experience, the cheapest one with one prong is all you need. If I find a great one for under £30 I’ll let you know, but for now, go for the cheapest.

Two prongs are FINE, but messier. I have a one pronger and a two pronger and they give pretty much the same readings.

I had full planned on doing a whole ‘dos and don’ts’ with moisture metres, but the only thing I could think of was DON’T leave your moisture metre in soil or water.

It’ll fuck it up.

I don’t know why or how, for I don’t care am not a scientist.

Just don’t do it.

4 thoughts on “How do you use a plant moisture metre?”