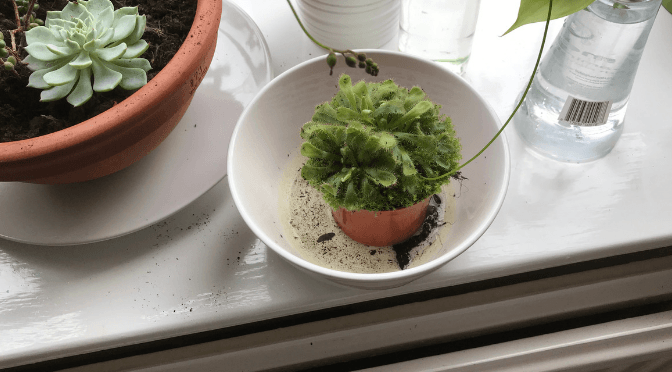 Ah, fungus gnats, the bane of all houseplant owners, (and my boyfriend, who’s plagued by them, and is pretty uninterested in the plants). Why do they inevitably turn up and bug you whilst you’re trying to drink a casual glass of wine and watch Gardener’s World?

Fungus gnats are attracted by rotting organic matter and love the moist* soil inhabited by your houseplants. They’re also rather partial to light sources, and carbon dioxide (who isn’t?).

But don’t worry, I googled it and there’s stuff we can do. But first, let’s get back to basics…

What are fungus gnats?

I’d give you the scientific name, but there are actually six or seven different kinds, with loads of different variants – but they’re all small, black, and feed on fungi in soil.

I do recommend that you watch them traipsing around on the soil of your houseplant because considering they’re literally called flies, they’re crap at flying. You could probably squash one with your fingers, but I’m vegan and I won’t do that.

However, larvae can. As I mentioned before, the primary diet of fungus gnats is *drumroll* er, fungus. But if the larva is especially hungry, or there’s a lot and they’ve exhausted their supply of fungus, then they’ll turn to the next best food source – the roots of your plants.

If you’re concerned that you have too much fungus on your plants, I have a post on literal mushrooms growing in the soil, and one on regular old mould.

They can do significant damage to the feeding systems of your precious plants, so it’s best that you get them under control asap.

Will fungus gnats harm me (or my pets/kids)

It really depends what you mean by harm.

Physically, no. Fungus gnats don’t/can’t bite, but by Christ, they can be annoying.

They like to get right up in your face or fall in your wine or get between your mouth and the next bite of your sandwich (they don’t tell you what to do about flies flying in your mouth in vegan school).

Their desire for CO2  makes our mouths and noses absolutely irresistible, so try not to take it too personally – you’re not attracting flies due to an imperfect showering regimen, you’re just breathing.

Gnats won’t hurt your pets or kids though (depending on how you consider your plants, I suppose), though if your dog is bothered by gnats you can make citronella sprays to repel them.

How do I prevent fungus gnats?

Well, from what I’ve read I assume that to stop them from swarming around your face you need to stop breathing.

Bear in mind that fungus gnats are extremely common.

Their life cycle is also such that you could easily bring them into your home on a new plant and have no idea – it takes 17 for them to mature from egg to flying fly, so you could be bringing in eggs and larvae without realising.

If finding an alternative to breathing is a bit extreme for you then you could firstly review your watering routine.

If you’re a serial over-waterer, get yourself a cheap moisture probe. If you just can’t stop, I have a post on how to stop overwatering your plants here.

Maybe it does, but it also attracts fungus gnats like a boss.

This is on my to-do list – so far I’ve only tried it on my cactuses.

How do I get rid of fungus gnats?

Alternative methods of getting rid of fungus gnats?

You can get all kinds of traps and sticky things to get rid of fungus gnats but I hate them. If I were to use a trap I’d need one that killed the gnat instantly – the sight of them flapping around on them traps is heartbreaking.

You may think I’m crazy for thinking that, but there you go. I didn’t want to give up cheese, but my stupid brain made it impossible for me to keep on eating it.

This is a weird segue into my favourite method for getting rid of fruit flies because some people would consider it cruel, and I do get that. However, for me it (figuratively) kills two birds with one stone:

I got a carnivorous plant, specifically, a Sundew plant.

If you’re interested in why I’m ok with my plant eating the bugs and not with trapping them myself, read through this article, on why vegans are ok with animals eating animals. Full disclosure: I wrote it.

My one issue with my Sundew is that they’re small (not their fault). It just means I can buy one for every area of my house that has plants. So at least nine.

Here’s mine, in all his glory:

I apologise for the dirty water, but erm, that’s life. You can just about see his magnificent flower spike – it doesn’t actually curve over like that – I’m holding it up.

One thing to note about Sundews is that they will not tolerate tap water, so I water mine with tap water that I harvest from the sky using a highly technical rainwater collection system comprising three buckets left outside.

I’m hoping to upgrade this soon. By which I mean I hope my boyfriend does, because I don’t want to.

Sundew’s also like to be kept moist all the time, so the perfect plant for the chronic over waterer.

This is why they’re such a good fungus gnat solution – they love to be moist and fungus gnats are often a symptom of overwatering. A match made in heaven (although after a while you may be left with only Sundews alive).

I hope this was helpful, and you weren’t turned off by the lack of vinegar and sticky traps. It’s just really not my thing.

*Apologies for those of you that don’t like it, but I’m going to be saying moist A LOT in this article.

3 thoughts on “Why do house plants attract flies?”