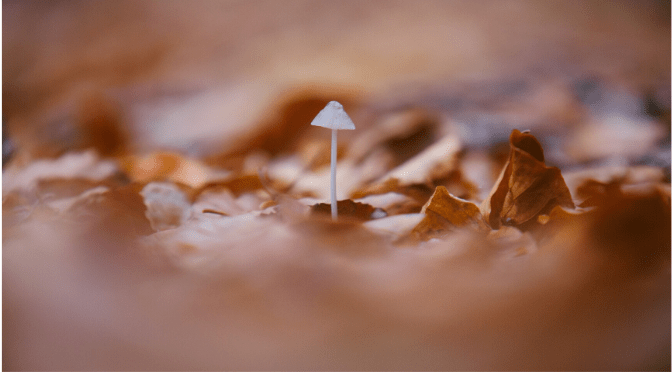 I bet most people in the world have no idea the shock one experiences when they happen upon a surprise mushroom in their home. Let’s assume you have, hence finding this article.

It’s only happened to me once, when I found a mushroom chilling in my chronically overwatered (not by me) string of pearls plant. I assumed something was deathly wrong, and nearly hurled the whole thing out of the window, but luckily I didn’t, because it’s fine.

Mushrooms growing in your house plants aren’t necessarily a bad thing, but they could be a sign of overwatering, really fertile soil, or just that somewhere along the line some spores got into your plant. They won’t harm your plant.

Where did the mushrooms in my house plant come from?

There are a few reasons you’ve ended up with mushrooms in your soil:

This is the most likely explanation for the mushrooms in your soil. Mushrooms spores were flying around somewhere near the plant, and a few dropped into the soil.

This could have happened anywhere along the supply chain: in the manufacturing of soil (is it called manufacturing? Wherever soil comes from, anyway), in the nursery where the plant was grown, whilst it was being shipped, or in the garden centre you bought it from.

Mushrooms thrive in rich soil, so the spores can germinate easily. It seems that Miracle Gro Soil is notorious for growing mushrooms, so if you don’t want them, avoid Miracle Gro.

This could be an issue, but you’d be more likely to get mould than mushrooms if this were the case.

If you’re new to house plants, you may find getting a moisture metre makes things a bit easier. You can pick this one up from Amazon pretty cheaply – between $10 and $15.

Are mushrooms dangerous to my plant?

Chances are, the mushrooms growing in your house plant pot are Leucopcoprinus birnbaumii. They’re usually pale yellow in colour and have gills on the undersides of the cap.

They won’t damage your plant because they obtain their nutrients from decaying matter – they’re competing with fungus gnats, not your plant.

However, Leucopcoprinus birnbaumii reproduce by sending out spores, so if you have one, you’ll probably end up with lots. They live in tropical areas, so if you live somewhere with a more temperate climate, they probably won’t be able to reproduce as readily as they could in warmer temperatures.

If you find them growing alongside your vegetables, they won’t affect the taste or toxicity of your crop.

Are they dangerous to me?

The spores in the air don’t provide a health hazard, although they thrive in similar conditions to mould, so check that you don’t have any of that hanging around.

The mushrooms can be toxic, but as long as you don’t eat them, they’re harmless.

Do I need to get rid of the mushrooms in my plant?

If there are only adult humans in your home, then no.

Mushrooms only pose a threat if they’re ingested, so if you have kids or pets that might like to snack on a plant pot mushrooms, it’s probably best to either try to remove them, or to put the plant somewhere where it can’t be reached by little hands or paws.

How do you get rid of mushrooms in plants?

To be honest, it’s not always easy, especially if you live in a warmer climate where the spores are hanging around in the air.

You can simply pluck out the mushrooms when they appear. Pluck them out by the stem, not the cap, since you’ll probably just pull the cap off.

One of the more successful ways to remove mushrooms is to re-pot the plant in fresh new soil (or remove the top 1/2 inches of soil if the plant would be compromised by a full re-pot. I have a whole article on how to repot house plants properly.

Be sure that when you repot your house plant, you thoroughly wash the pot in hot, soapy water. You can add a drop of bleach if you like, just to be sure you’ve removed all the spores.

There are loads of commercial fungicides on the market, but I’ve never used one, so can’t really recommend a specific one. In order for the fungicide to be successful, you have thoroughly soak the soil in the solution.

Just be aware that some plants have symbiotic fungi at their roots, so you can damage the plant by killing off beneficial fungi.

To be honest, I’d just pluck the mushrooms out and leave it at that. They can be a sign of healthy soil, and they’re not doing any harm.

Is there anything I can do to stop mushrooms growing in my house plant’s soil?

In all honestly, not really.

Unless you decide to convert all your plants to semi hydroponics.

Mushrooms thrive in warm, humid conditions, and if you starve them of that by putting them somewhere cool and dry, you could end up damaging your plant.

There are, however, a few good plant husbandry tips that will both help your plant and reduce the chances of mushrooms growing:

In short, don’t worry about mushrooms if you’re not overwatering. Don’t eat them, keep them out of reach of kids and pets, and pick them out if they bug you.

21 thoughts on “Why are there mushrooms growing on my house plant?”