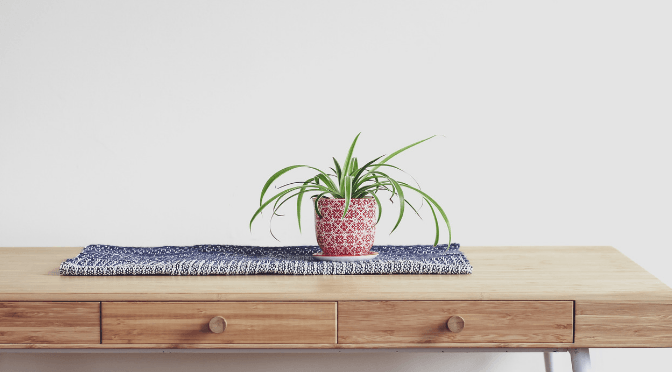 What’s the point of doing all your research and learning how to take care of your spider plants if they’re going to die in a year anyway? Or two years…Or ten years…

Spider plants can live an extremely long time – as in, well upwards of twenty years.

Personally, I can’t seem to get mine to thrive. I have no idea what’s going wrong. When I asked about it on Instagram, the general consensus is that spider plants want to be left alone.

That being said, it’s pretty old. So if you’re looking at cost per year whilst factoring in effort, spider plants are a winner. But it may not look great.

I have literally 100 plants. I have no problem keeping calathea, maidenhair ferns, crotons, fiddle leaf figs, or Alocasia alive. 🌱🌱🌱 But my spider plant HATES me. This is actually the best he’s looked in a while 🙃

Spider plants are super hardy. Look at me, unintentionally giving it the worst life ever.

Spider plants are fairly forgiving when it comes to neglect.

I’ve found that the only way to kill them quickly is to overwater them (which is true for a lot of houseplants, and most animals), which is why I recommend a terracotta pot.

Terracotta is porous and will suck up a lot of excess moisture and allow it to evaporate out of the sides of the pot.

Before I really got into houseplants, I was a serial neglecter. AND YET my big spider plant was fine. He spent his life in low light on top of a bookcase and was watered, er, shall we say sporadically? I’m taking every two months here.

He didn’t produce any pups, but he didn’t die.

And then I started getting more interested in taking care of him and shortly after nearly killed him, ironically enough, by overwatering.

How much light does a spider plant need?

How to get your spider plant to thrive and produce babies

Give them plenty of light

I just typed ‘planty’ instead of ‘plenty’ and laughed for way too long. Anyway.

Spider plants have this reputation for being able to live in low light conditions, and it’s not unfounded. They can live for a long time in low light without showing any signs of neglect.

Let me tell you a quick story.

You know when you see those infographics about which plants can live in the bathroom?

I was desperate for a plant that could live in my bathroom and settled on a Sansevieria (or Snake Plant, or Mother-in-law’s Tongue).

I bought one, and we were happy.

I was. I had a shiny new plant in my bathroom and they were swell.

This was before I actually knew anything about houseplants. At this point, I thought that the optimum level of plant care was keeping it alive. My snake plant was surviving, when he could have been thriving.

And then I watched THE Jenna Marbles video. Weird way to segue into getting interested in taking care of my house plants, but there you go. I found how much she cared for her plants inspiring.

Long story short, my snake plant HATED the bathroom. Their thick leaves should have lead me to this conclusion, but nope.

When I realised my mistake I whipped them from the bathroom windowsill (he was replaced with an asparagus fern that sometimes touches me in the shower (winky face emoji) and has grown like a weed) and onto the very dry windowsill in the spare room.

Oh, and just to mention – just because a plant likes dry conditions doesn’t mean they don’t need water. The snake plant is actually quite thirsty – they really don’t like the humid conditions of my bathroom – it just likes to really dry out between waterings.

That was a long digression.

If you want your spider plant to thrive, pop them in a sunny spot without intense bright light (they might burn).

Bathrooms are good because they have those wobbly windows (probs not the correct term), and are pretty humid.

If you have limited bathroom real estate though, save it for ferns. Spider plants do fine in bright spots a few feet away from the window. If you worry about humidity, group your plants together so they can suck up each other’s moisture. As it were.

Or just do the sensible thing and get a humidifier.

Here is a post on how to keep your plants from dying.

How to water your spider plant

As I’ve already mentioned a billion times, in my experience overwatering is far more detrimental to the health of your spider plant than a little bit of neglect. If you’re worried about overwatering, or you know you’re a chronic over-waterer, then I recommend a couple of things

2 – For the love of all that is holy get a moisture meter – check out my resources page for the one that I use.

I know that a lot of people doubt their accuracy, but they changed the house plant game for me. Just stick the probe in the soil and water when it says ‘dry’.

They’re under a tenner on Amazon. Life changing, I swear.

In terms of what you should be watering with, I’ve found that spider plants have no objection to tap water. I use rainwater when I can, but reserve it for plants that really need it – namely my carnivorous one and calathea.

That being said, your spider plants would be grateful if you let the water sit out for a couple of days to a) let it come to room temperature and b) let some of the chlorine evaporate.

If you’re a chronic overwaterer, I wrote a whole post on how to stop overwatering. Yes, it’s that common an issue.

How to fertilise a spider plant

Spider plants don’t really need to be fertilised, so you don’t need to put that on your friend’s spider plant care guide BUT that doesn’t mean that you shouldn’t fertilise yours.

I personally fertilise my plants every month (or when I remember) with an organic seaweed fertiliser.

By the way, if you’ve bought a spider plant from the garden centre or supermarket or wherever, I would hold off from fertilising for, well, probably a year.

The soil they’re in will probably have some form of fertiliser mixed in, but in any case, should have enough nutrition to last the growing season.

Don’t fertilise plants outside of their growing season. They don’t like it at all.

If you’re unsure about the hows and whys of fertilising, read this post.

What do you do with spider plant babies?

I’m not sure harvesting is the right word, but that’s how I tend to think of it. When I propagate my parent’s one. Because mine has never produced pups. Cry cry cry.

The babies grow on the ends of stalks.

Just snip them off and pop the baby in a jar of water. You don’t need to spend money on propagation vessels.

I actually use a glass bottle that once housed sweet chilli sauce (I washed it thoroughly). After a few days, roots should start to form.

Once the roots are over half an inch long, pot ’em up.

Once you transplant them in to potting mix, it’s important that you keep the soil more moist than you usually would, to allow the spider plant pup to get used to soil.

If you notice your pups aren’t thriving in soil, pop them back in water and let their roots grow a little longer.

Home-propagated plants are an incredible gift for these three reasons:

You might have to ‘harvest’ your babies in summer because they’re slower to grow in winter – though if you’re organised you can have Christmas gifts taken care of by September. Yessss.

Sure, you may need to invest in a nice pot, but you can get a decent-sized terracotta pot for well under a fiver that your spider plant child will LOVE.

You could even print out a little sticker of care instructions to accompany your offspring to their new home.

Here’s a guide to propagating plants for lazy people.

Although give too many away and you run the risk of becoming ‘the plant girl’. Still, people love plants in the main.

They’re a great piece of cheap-to-keep home decor and if you get sick of them, you can neglect them until they die or give them away.

Please give them away.

I’ve done the former so many times and now the guilt is REAL.

Not only will they not kill their recipient’s cat, but it’s thought that spider plants are a mild hallucinogen for cats.

Can you cut the brown tips off spider plants?

Yes, absolutely. If you want to know more about the causes of brown leaf tips and how to prevent them, I have a whole brown leaf-tip post.

You can also prune the baby spider plants off and chuck them if you don’t like the way they luck.

Jokes, it doesn’t harm the plant. But I think they look really cool.

Perhaps you’ll even be able to take it with you into your old folk’s home.

It’ll even reward you with lots of babies that you can thrust upon unsuspecting victims as ‘gifts’ and turn them into crazy plant people too.

If you’re having trouble getting into the rhythm of taking care of your plants, then I highly recommend you watch the Jenna Marbles video that I linked to above.

I know that she’s not everybody’s cup of tea but I found that video quietly life-changing (not ten minutes after watching it I moved my long-suffering snake plant).

She also put me onto the moisture meter, and I copied her little ritual of wandering around the house with my morning coffee, probing plants.

I promise it’s more relaxing than that sentence made it sound.

She cares for her plants with as much dedication as she cares for her dogs, and it really inspired me to care for mine better, and now I have dozens.***edit*** hundreds. Oops.

It’s actually quite a problem.

This blog is nothing more than an excuse to buy more.

6 thoughts on “How long do spider plants live? (+ care tips)”