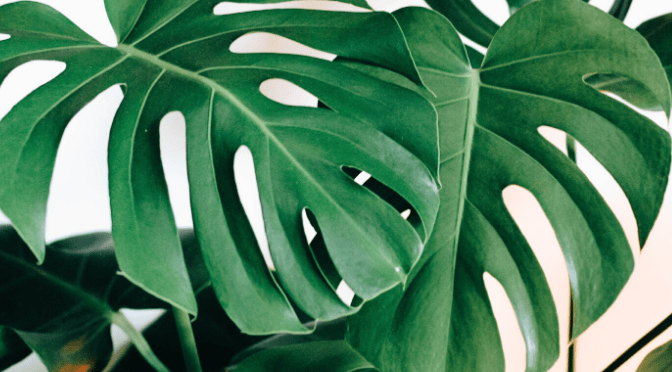 Monstera Deliciosa are very much having a moment, and it’s easy to see why.

They’re large, striking and not particularly inclined to drop down dead because you moved it a quarter of an inch to the left (*gives side-eye to the fiddle-leaf fig*).

Large Monstera can be expensive, so it might be worth putting a few plants in one big pot to get a fuller-looking plant more quickly.

Where do Monstera Come from?

Monstera Deliciosa is indigenous to Central America, from Mexico to Panama. However, they’ve been introduced to islands like Hawaii and the Seychelles, where, predictably, they’re mildly invasive.

We can’t just leave stuff alone, can we?

Monstera means monster, and deliciosa means delicious, which is quite pleasing. A delicious monster. Lovely.

Monstera Deliciosa is an epiphyte, meaning they attach their roots to tree trunks and grow up them towards the light. They get hecking HUGE in the wild.

I mean, they get big enough indoors.

I encourage you to watch Amanda from Planterina’s YouTube video that shows her Monstera’s aerial roots trailing along the floor. It’s epic.

I think I’ve linked the right one.

All her videos are amazing anyway.

Where to put your Monstera Deliciosa

If you want epic growth, place your Monstera near a bright-ish window, but not in direct sun (although an hour or so is probably fine – it certainly is in the UK).

Make sure you give it ample room to grow. Watch for aerial roots attaching themselves to walls and floors. Let it climb up a moss pole to reduce the chance of it sticking to the ceiling, but you’ll still need to keep an eye in it.

As I said, it wants to attach itself to a tree trunk and climb towards the forest canopy, and it doesn’t know your front room isn’t a rainforest.

It’s actually pretty difficult to kill Monstera (though overwatering is probs the easiest way to do it), so don’t worry too much about putting it in the wrong spot.

Just be aware that the darker the spot you put it in, the slower it will grow and the less water it will need.

How much light do Monstera Deliciosa require?

If you want your plant to grow quickly, then a lot of bright, indirect sunlight is best.

If you put your monstera in a south or west-facing window it might be an idea to put up a sheer curtain to block out a few of the rays – to try and mimic the dappled light it’d receive in the rainforest.

A monstera will survive in medium light but won’t put out much new growth. You may also notice small leaves and thin and scraggly-looking roots.

In my experience, they’re pretty tolerant of crappy lighting.

What temperature do Monstera Deliciosa prefer?

In a warm, brightly-lit corner, your monstera will thrive. However, I’ve had mine for a few years now and it’s pulled through the UK winter like a trooper.

Having said that, don’t put monstera in draughts. They won’t like that, for there are no draughts in the rainforest.

Mine actually is in a draught (do as I say, not as I do) because it’s right next to my french windows, which we use as a back door. I probably should move it come winter, but I kinda want to see how he does.

They stop putting out new growth around late September but remain perky enough.

I imagine a lot of commercially grown Monstera Deliciosa are bred to be a bit hardier than their wild counterparts, but they’re known to be an invasive species, so they’re pretty tolerant.

Again, will take whatever conditions you throw at it, but higher humidity will result in a faster growth rate. Monstera are hard to kill, but also difficult to get to grow quickly. Humidity really helps – I wrote a whole post here on helping Monstera to grow faster.

Mist it, if you like. It’ll certainly help keep it clean. I’m not a misting fan.

If you don’t want to invest in a humidifier, I have a post on increasing the humidity in your home in other ways.

Optimal conditions for growing great big fenestrated leaves would include high humidity – 60% and above. But if your humidity is 30% your Monster will be 100% fine, it just won’t necessarily thrive.

How to water a Monstera Deliciosa

Like many aroids, they like a good thorough soaking and then to be left to dry out. I water mine when the moisture probe hits 2-3.

In my experience, Monstera aren’t averse to tap water, but if you have rainwater, then give them that. Room temperature please – we don’t want to shock the roots.

I’ve never had an issue with crispy or browning leaves, and mine has had some serious neglect.

I have a whole post on watering monstera here.

How to fertilise your Monstera Deliciosa

I fertilise monstera on a monthly-ish basis with a seaweed fertiliser. A lot of people recommend a 20-20-20 fertiliser, but I’m sticking with seaweed.

Only fertilise Monstera when they’re growing – usually between late April and early October.

I’ve read up a lot on fertilising Monstera, and there seems to be a lot of disagreement of how heavy a feeder they are.

I’m going to assume that a Monstera that’s in a bright, humid spot is going to grow quickly and therefore need a more food. A Monstera in a dark corner might not need fertilising more than once a year.

If your Monstera was growing a lot and then stopped, check that it doesn’t have any pests, and if it doesn’t fertilise.

Despite quite a lot of neglect, I’ve never had pests on my Monstera. Apart from fungus gnats, but they don’t count – they’re on everything.

A quick look at Google and we have reports of mealybugs and spider mites as being common threats to monstera. Standard.

If you get into the habit of regularly cleaning the leaves of your plant with neem oil, you’ll be less likely to attract the attention of any unwanted critters.

Be extra vigilant about keeping your Monstera dust-free, and wipe with a neem oil solution. You have been warned.

I have thrips on my Variegated monstera (thai constellation, I’m not rich enough for an albo) and they’re the very devil to get rid of. If you’re after practical advice on reducing pests, read this article.

What potting mix to use for Monstera Deliciosa

You can use house plant potting mix – I have before and my monstera didn’t die.

If you want your monstera to thrive though, I’d recommend adding orchid bark and perlite to potting mix to make it a bit chunkier and aid in draining. Equal parts perlite, potting mix and orchid bark is good.

Monstera really like homemade potting mix. I have a recipe in my how to repot article.

If you fancy trying something a bit different, you can grow Monstera entirely in water (read about how to here), though it can be hard to support them when they get big.

What pot should you use for a Monstera?

Mine’s in terracotta and it seems happy enough.

I don’t think they’re fussy about the material they’re potted in, but make sure you get a pot large enough that you can fit a moss pole or trellis into it.

Giving your monstera something to climb up will encourage it to produce bigger leaves with more fenestrations and holes.

How to propagate Monstera Deliciosa

The easiest way to propagate Monstera Deliciosa is to take cuttings. Simply chop off a portion of your plant below a leaf node (the lumps on the stem that produce leaves and roots) and put it in water.

If you include an aerial root in your cutting, that’s even better. It won’t turn into a ‘proper’ root, but it means you’ve definitely got the right bit in the water

Before putting the cutting in water, let the end callous over for an hour or so by leaving it exposed to the air. You can also seal the end with wax (dip it in a melted tealight). This reduces the chance of the cutting rotting in the water.

I use rainwater for propagating since cuttings can be delicate, and we want to be nice to them and make them grow. Make sure it’s at room temperature too. We don’t want to go scaring the cutting.

What should you do with the aerial roots on a monstera? If you’re unsure what to do with them, I have a post on your options here.

How much should you pay for a Monstera?

I’ve seen some RIDICULOUS prives for Monstera deliciosa (just the regular green ones) so I’ve found some shops on Etsy that sell them at decent prices.

(If you live in the UK, a lot of garden centres sell them pretty cheaply)

If you want to buy a monstera of whatever type, I have an article here on how much monstera cost.

There are loads of Etsy shops you can get Monstera from if you live somewhere where they’re super pricy:

A lot of people are shying away from the humble Monstera Deliciosa because it’s too common and overplayed, but I think it’s so popular for a reason.

Whilst it can be a bit of a chore providing conditions conducive to quick growth, it’s nigh-on impossible to kill the things.

I mean, we’ve had ours for years and neglected it…badly. It wasn’t fertilised for years, shoved in a dark corner and was variously under and over watered.

It’s rallied though and did very well last summer.

Not really one I’d recommend giving someone as gift though, because…she big. Although the baby ones are cute, and by the time it’s taken over the recipient’s house they’ll have forgotten who gave it to them.

If you have any questions then pop them in the comments below and I’ll do my best to answer them.

4 thoughts on “Plant profile: how to care for…Monstera Deliciosa”