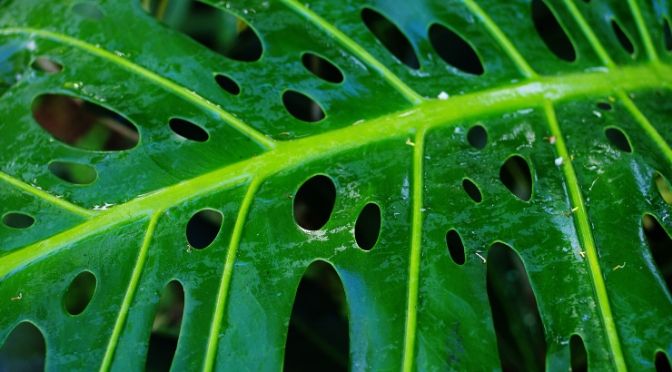 Monstera are extremely hardy and easy to grow, and they can grow in low light. They can’t, however, grow in NO light, and they won’t thrive in low light.

But they probably won’t die either.

Monstera deliciosa are a dream for new plant parents.

There’s also a very big chance that they’ll get thrips at some point, but they’ll handle a mild infestation happily. Just keep them a couple of feet away from your other plants, and always have neem oil handy.

What do I mean by low light?

There are a million apps out there, all of which are of varying levels of reliability.

I had a brainwave that I thought was GENIUS.

I’ll pick a free app, and measure the light in my house, and tell you what the app reads in various places. For example, my aglaonema lives in 158 lux apparently.

Except my results read between 8 and 252. Two readings, in identical places TWO SECONDS APART.

If you need to turn the light on to read a book comfortably, that’s low light.

If you have a room with no windows, then get a fake plant. But if you have a dark corner, get a fern.

Or a Calathea – especially if you want a plant that’ll thrive for years and then drop down dead for no apparent reason.

This article will help you make the most of the light you already have.

Can Monstera live in low light?

In fact, it’s quite a skill to kill a monstera.

I’ve had them recover from root rot, underwatering, thrips (obviously), being root bound, and not being fertilised (or changing the soil) in a decade.

I’ve even had a monstera that I watered every day for weeks, and it wasn’t bothered (well it didn’t look bothered).

Luckily, I lost interest in drowning the poor thing soon after and went back to plain old neglect, which suited it better.

Unless you have a room that has very little light (no or very small windows) your Monstera will probably stay alive.

What light is best for monstera?

More is more for Monstera.

Like I mentioned in this article about keeping Monstera outside, if you acclimate them properly, then Monstera will thrive outside.

You may need to shade them from really bright light though – even the ones in the wild suffer from the odd sunburn.

In their natural habitat Monstera use their aerial roots to climb trees so that they can reach the light.

The more light they have, the bigger their leaves will grow. In order to filter light through to the leaves below, they develop holes and splits in their leaves.

The more light you give your Monstera, the bigger (and the faster) it’ll grow.

How to help a Monstera living in low light

In general, the less light a plant requires naturally, the more finicky it is.

Low light tolerant plants like Calathea, some ferns, and peace lilies, are happy to live in a gloomy spot.

Plants are living things – they can’t live without some form of sustenance, whether that’s light, water in the soil, or water in the air.

To be honest, your Monstera is unlikely to really thrive in low light. You’re certainly not going to be seeing those big beautiful fenestrated leaves – those leaves form in response to light, and won’t occur in its absence. From the plant’s point of view, it’s just a waste of energy.

If it’s in your budget, a set of grow lights will do the world of good. You can get white ones if you don’t like the ones that cast the eerie purple glow.

I use grow lights instead of a regular reading lamp in a recessed corner of my living room. They’re usually only on for about five hours a day, but plants that require similar light to Monstera (like syngoniums and philodendrons) thrive there.

Grow lights aren’t a replacement for natural light – my plants would grow more quickly on a windowsill – but they still encourage growth.

To keep your Monstera alive in low light, you’re going to need to make sure your watering and humidity games are on point. The plant will have less energy than if it were growing in brighter light, so it’ll weaken even more if it’s dry/drowning and humidity is under 50%.

This isn’t a time for misting. In fact, misting can cause infections to spread more quickly – plants don’t usually like getting wet leaves.

You need to keep an eye on your humidity using a hygrometer, and if it’s lower than 50% and you only have the option to keep your plant in low-light, then get a humidifier. Check out my recommended gear page for the products I recommend.

You’ll need to dust your plant with neem oil at least once a month to both optimise the light it can absorb and keep pests at bay.

What about keeping variegated monstera in low light?

I wouldn’t recommend keeping variegated Monstera in low light. They’re a little more delicate than regular green ones, and they’re super expensive. You’re going to want them to be growing as quickly as possible so you can chop and prop (and sell).

Keep an eye on variegated monstera. They burn in bright light, but are even slower to grow than normal in low light.

I keep mine about seven feet back from a west-facing window and it’s still growly painfully slowly. To be fair, I’m happy as long as it doesn’t die.

I don’t advise keeping Monstera Deliciosa in low light, but you can do it.

They won’t thrive in low light, but their hardly nature means that they won’t die either. A lamp would do them the world of good.

I wouldn’t try to keep adansonii in anything less than bright indirect light, because they tend to only have two states of being: thriving or dying.

Nowadays, I try to keep my plants in as close to their natural environment as is possible. North Yorkshire and South America aren’t particularly similar in terms of climate but I’m trying my best.

Even my ZZ plant now gets bright indirect light, since my Ctenanthe Lubbersiana is thriving in the low light spot the ZZ used to occupy.