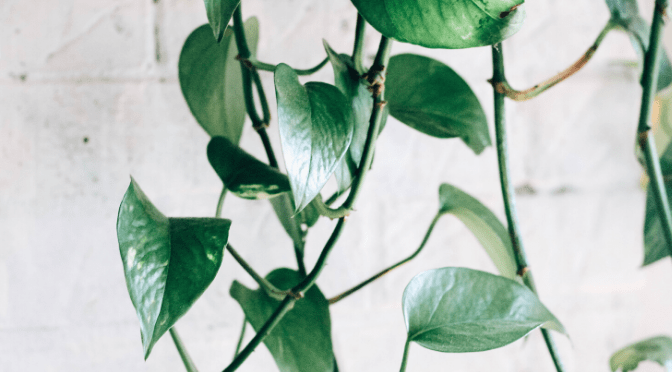 In my opinion, Pothos are a great plant for beginners to try to keep alive. Not because they’re extremely easy to care for (though they’re not difficult), but because they’re cheap, easy to replace, and not easy to kill.

They’re also quick growers, which is rewarding for newcomers to plant parenthood.

There are dozens of different types of Pothos, some of which are easier to care for than others, but you’ll find that they all require the same basic care.

Pothos come from the rainforest, so if you provide warmth, indirect bright light and humidity, you’ll probably do ok with most Pothos. However, the more commonly available, commercially grown varieties are extremely tolerant of neglect.

What I’m trying to say is this:

Don’t consider yourself a Pothos expert just because you haven’t killed a Golden Pothos, and then immediately go out and spend £200 on a fancy Pothos and wonder why it dies.

I’m afraid I have no desire (at this time) to do a post explaining the needs of all the dozens of different pothos. If you’re a beginner get a Golden Pothos or a Marble Planet.

Heavily variegated pothos can be a bit of a roller coaster of brown spots and dead leaves and can put off a beginner. My N-joy refused to grow for an age and now is happily putting out leaves (in December).

Satin pothos are easy to care for, but beware: they have a habit (at least mine does) of dropping their biggest leaf just before a growth spurt. It’ll turn an alarming shade of yellow and then drop off, before a load of new leaves appear.

The first time this happened I panicked, assuming either it wasn’t getting enough light or I had overwatered it. So, if you have a satin pothos and just one leaf has turned yellow, say your goodbyes to that leaf and prepare for new growth. If you have multiple yellowing leaves, it may be a light or root issue.

Where do Pothos come from?

Pothos originally hails from French Polynesia, but can now be found pretty much anywhere between there and, er, India (assuming you travel east from India, of course, it’s not growing wild in Basildon).

As you can probably guess if you’ve ever grown a golden Pothos, it’s considered an invasive species in many countries. This bitch likes to grow.

Where should my Pothos live?

Pothos are happy in a lot of places – they would really like an east-facing windowsill, but would also be fine on a bookcase or on a coffee table a few feet away from the window.

They’re happy anywhere really, as long as they get enough light, and aren’t sitting in a draught.

How much light does my Pothos need?

Pothos can survive in low light, but you won’t necessarily see much growth. There’s one at my work that receives virtually no natural light, but is still producing (small) growth in December. It gets about 14 hours of artificial light a day, from a regular light bulb about 3 feet away.

Bright, indirect light will produce the most growth. It will also mean variegated cultivars will grow faster, though still slower than all-green varieties.

If you spend a lot of money on a fancy Pothos, research its specific light requirements. Golden Pothos are ok with artificial light, and my Marble Planet is also pretty happy with little natural light (although he gets a couple of hours near grow lights a few times a week.

What temperature range does my pothos prefer?

God knows how cold my work gets at night and over the weekend in winter. It probably dips down to about 9 degrees C, and still, it grows.

This is far from ideal though – Pothos come from the rainforest and like to keep things strictly double digits. About 18-24 is ideal, and they can go a bit hotter if the humidity is ok.

Again, these poor sods can tolerate dry air, but they really like the 50-70% humidity range.

An exception to this is the ones with white variegation – Marble Queen, N-Joy, Majula/Happy Leaf etc.

They can get a bit crispy if they don’t get humidity. I put mine in my bathroom window (south-facing, but sheltered by the house next door and with textured glass) and they’ve been throwing out a lot of new growth.

How do you water a Pothos?

Pothos can go for a decent amount of time between waterings – even in summer mine only needed watering every ten days or so.

The secret to watering pothos is to give them a really thorough soaking and then leave them to dry out almost completely. It’s best practice to water them when the moisture metre is reading about a 2, but I’ve let mine get to 1 (and under, oops) plenty of times and they’re still growling like mad.

As far as I’m aware they have no preference about water type, but again, if you get a really rare one, it’s probably best to still to filtered or rainwater.

Pothos do wilt noticeably if they’re thirsty, and spring back pretty quickly (an hour or two) once they’re watered.

How do you fertilise Pothos?

I don’t fertilise my pothos very often – some experts say they don’t need fertilising at all, but I like to give mine a little boost every couple of months or so.

I use a seaweed fertiliser that’s very gentle. You could also top-dress the soil with worm castings for a slow-release fertiliser.

Mealybugs and scale (of which the former is a type of the latter) are the most common pests found on Pothos.

I’ve also found that for some reason variegated pothos is much beloved by fungus gnats, but not enough to do any damage.

Pothos are a bugger for collecting dust, so your best course of action for both cleaning and pest prevention is to clean the leaves regularly (well, every couple of months MINIMUM, weekly is best) with warm water with a dab of neem oil mixed in.

Any well-draining aroid mix will be great for Pothos – there’s a recipe here. I make my own potting mix, but pothos aren’t typically picky. If you buy a good quality potting mix (Fox Farms (US) or Westland (UK) and add some perlite, it’ll be all good.

They’re not fussy in my experience. I like to pot mine in terracotta pots because they do like to dry out between waterings and appreciate a little airflow to the roots.

How to propagate Pothos

It’s easy to propagate a lot of different types of Pothos. Chop a vine off, ensuring it has a node and then put it into either water or soil.

Roots should appear in a few days.

I prefer initially rooting the cuttings in water purely because I like to see what’s going on, and then pot them back into the plant with the parent – this is a great way to produce a fuller-looking plant.

Apparently regular pruning encourages the plant to grow bushier, and it definitely stops the plant looking leggy. If your Pothos is already looking a bit leggy, I have an article here on how to rein that in.

I personally like the look of bushy and spindly Pothos, so don’t think that one is better for the plant than the other, but in general, plants that are growing upwards (like up a pole) will have bigger leaves than those left to dangle. I assume it’s to do with the amount of light.

Yes. Don’t let your dogs and cats eat it. And don’t you eat it, since it’s mildly toxic to humans too.

I can’t find information on whether or not it’s toxic to bunnies (they digest plant matter better than us), but I wouldn’t risk it.

My experience with pothos

I have a few pothos, and they’re pretty easy to grow. EXCEPT. I bought a couple of variegared Pothos with a lot of white on last year (a Manjula and an N-joy).

Both stubbornly refused to grow – the N-Joy just sat there and the Manjula turned brown and lost of its leaves.

I was quite worried, because Pothos as meant to be super duper easy to grow. What was I doing wrong?

This year, both have THRIVED (throve?). I’m not doing anything any different – I think they were both just suffering from a transplant shock.

For this reason, I would highly recommend leaving pothos alone until they’re fully acclimatised. No repotting unless strictly necessary, i.e. it’s a matter of life and death.