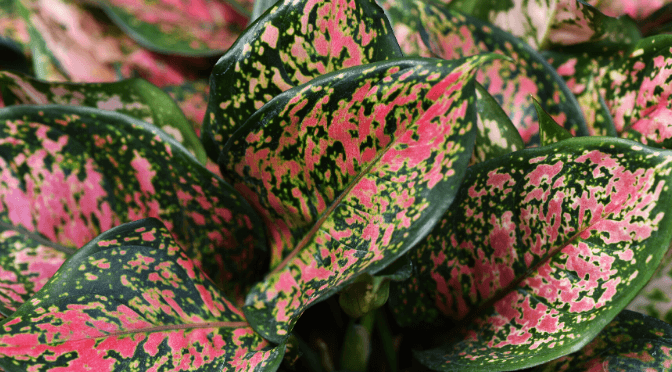 In my opinion, Aglaonemas are woefully underrepresented in the house plant community. They’re easy to care for and come in some pretty spectacular forms – I mean, check out the one above! It’s freaking PINK.

I’m not entirely sure about the plural of aglaonema being aglaonemas, but Google and Grammarly appear to be in agreement, so aglaonemas it is.

Quick note: my first aglaonema was bought by my boyfriend from the discount section of the garden centre. It was droopy and sad, but apparently pest free. I suspect overwatering and lack of humidity was the culprit, so don’t disregard a bargain. Just check it for pests and keep it in isolation for a couple of weeks.

Where do Aglaonemas come from?

Aglaonemas grow wild in the rainforests of south-east Asia – Thailand, Indonesia and Malaysia. The name Aglaonema means ‘shiny thread’ in Ancient Greece, apparently due to their shiny stamens. Alrighty then.

I do not know why they’re commonly referred to as Chinese Evergreens, and neither does Google.

Where should I put my Aglaonema?

Jokes, they like partial shade, but a bit of indirect bright light will be appreciated.

Aglaonemas don’t need to be on a windowsill, so experiment with any bare corners you have to see if it’ll thrive there.

I’ve read that Aglaonema both can and can’t live under artificial light alone, so I’m thinking that medium light (or a grow light) is best for them.

Remember though, plants convert light into energy, of a bit of bright, indirect light will increase the growth rate of your Aglaonema.

Since they would naturally live beneath the rainforest canopy, the leaves are likely to burn if left in the sun, so put up a sheer curtain if you want your plant near a south or west-facing window.

It’s the general consensus that the more variegation your Aglaonema has. the more light it needs. Mine is, I would say, about 50% variegated, and is about 5 feet from the window (and growing nicely).

Aglaonema like a temperature range of between 18 and 24 degrees Celcius, which basically translates are room temperature.

Do you see a theme here? They’re not bothered. They just want you to be happy.

Seriously though, Aglaonemas come from the rainforest, so I am aware that here in the UK I can’t exactly leave it near an open window in winter, but it’s also not a plant I worry about succumbing to the cold.

If you look online there’s a lot of talk out there about how intolerant of cold temperatures Aglaonema are, but I don’t think they’re any less tolerant than any other tropical plant. Keep it above 15 degrees C and you’re good.

Aglaonemas do like a bit of humidity. Mine grow in my least humid room, though there’s sometimes a spike because it’s the room I dry my washing in (top plant hack!), but it’s also the warmest room.

It’s doing pretty well bar a few crispy tips. However, since I got this from the discount bin I’m not sure if the crispy tips are something I could ave prevented or not.

Ok, I moved my hygrometer into my office (where the Aglaonema is) and the humidity is reading 61%. So it’s fine. Anything above 50% will be sufficient, and 40% will probably be tolerated.

How to water your Aglaonema

Aglaonemas are pretty forgiving when it comes to being underwatered, which is great for a natural underwaterer such as I. Follow the same watering rules you would for any other aroid – water them thoroughly, but only when they’re pretty much dry.

We’re talking about a 2 or 3 on the moisture metre.

Aglaonema don’t like sitting in water, but they also won’t die dramatically if you’re a couple of days late.

How to fertilise your Aglaonema

I can’t see that they have any special requirements fertiliser-wise, so once a month with a general-purpose fertiliser will do. I usually use seaweed emulsion, but this spring I shall be experimenting with making my own from rabbit poo. I have two rabbits. They poo. Win-win.

Mealybugs, aphids, scales and spider mites. Wheeey. Keep the leaves clean and dust-free using a solution of neem oil and warm water and that can do a lot to prevent all of those critters settling in your Aglaonema.

Nothing too fancy – a general house plant potting mix cut with some orchid bark and perlite will suit it well, or any premade aroid mix. Aglaonema don’t like sitting in soggy soil, so you want something really well-draining.

What type of pot do Aglaonema need?

They’re not fussy AND they’re pretty slow-growing, so keep it in its nursery pot until you see roots starting to emerge from the bottom or top.

When you do need to re pot, they don’t seem to be fussy regarding pot material. I like the look of terracotta, plus aroids do like a bit of aeriation around the roots. Obviously a drainage hole is necessary to prevent root rot and keep your Aglaonema happy and healthy.

Yup. Don’t let your cat eat it. Also, don’t eat it yourself.

How to propagate Aglaonema

Apparently it is possible to propagate from leaf cuttings, but the information out there is sketchy at best.

Quite a few people grow Agalonema from seed too, but I’m way too impatient to deal with that.

The most common way to propagate Aglaonema is by root division – just remove the pups from their mother when they’re big enough and pot them up separately.

Mine is actually three plants in one pot, so I could easily split it once it’s a bit older.

I bloody love Aglaonema – I’ll take lush, green (easy care) foliage over blooms any day. Go and get one. They’re like a Dieffenbachia I can actually keep alive.