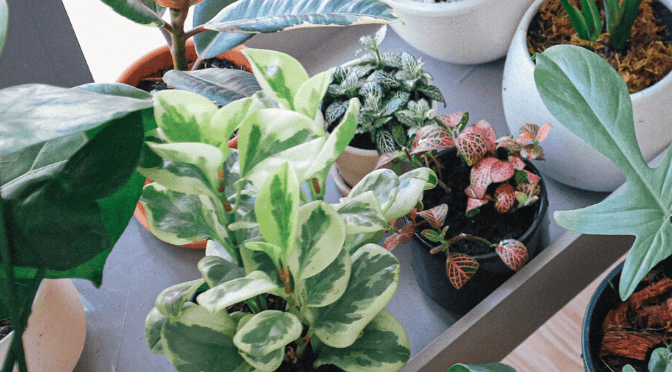 Where do Peperomias come from?

There are over 1500 species of peperomia in the world, spread over south and central America.

Except for 17 of these species, which somehow made their way over to Africa.

Peperomia have thick, waxy leaves, that come in a wide variety of shapes and colours. Many people collect them, and the number of species you see in garden centres have increased a LOT recently.

They’re small and unobtrusive I suppose. Far easier to collect than, say, philodendron and Calathea. Especially if you buy all the massive ones that are on sale because they grew weird. Not mentioning any names (it me).

Where should I put my Peperomia?

Peperomia tend to be fairly compact, so you don’t need to worry about finding them a massive plant stand, or a wide windowsill or anything. I think they look nice grouped together on plant shelves, but I appreciate not everyone has shelves devoted to plants.

If you put them in a heavy pot (cover or otherwise) they make pretty good bookends.

What kind of light do Peperomias need?

Peperomia like bright, indirect light, and if you want optimal growth, they’ll want a lot of it. Keep this in mind if you’re going to steal my bookends idea.

If you have leggy plants and need ideas on what to do with them, this article has you covered.

What level of humidity do Peperomias need?

They’re not particularly fussy, but they’ll be happy enough in 40-50%. They can live in much higher humidity though – I have a tiny Piccolo Bando that’s doing really well in my paludarium (an half-filled aquarium with a rocky bit of land).

Although that was a cutting from the one pictured below, and it’s never lived in soil. You need to be careful if there’s a dramatic change in humidity in your home – peperomia are quite prone to stem rot.

What temperature do Peperomias need?

The ideal temperature range for peperomia is 15C/60F – 26C/80F. Unless you routinely walk around the house in a scarf and gloves, your home should be plenty warm enough to keep peperomia alive.

How to water Peperomias

Since peperomia have thick, succulent leaves, it’s best to wait until the soil they’re potted in is completely dry before watering them. The thicker your peperomia’s leaves, the more drought-tolerant it’s likely to be.

I like to bottom water my peperomia – a lot of varieties’ leaves lie quite flat on the soil, and if they get wet often, it can cause damage.

In my experience, peperomia are quite thirsty plants, so check the soil weekly with a moisture metre or your finger.

How to fertilise Peperomias

Ideally, a 20-20-20 fertiliser, but any general house plant fertiliser will do if that’s all you have. Peperomias are quite hungry, so feeding every other week is recommended.

Only feed when your peperomia is growing – if it continues to grow throughout winter, fertilise it, but maybe only once a month.

I’ve only experienced fungus gnats, but peperomia are also a target for mealybugs and spider mites.

It’s important to keep the leaves of your peperomia clean so that they can photosynthesise properly. If you make up a spray of neem oil, dish soap (about 1tsp of each) and put into a spray bottle, and then fill up with water, you can use this as a plant cleaner/insecticide. It works really well and isn’t as toxic as commercial insecticides.

I clean my plants every couple of months or so (or more often if I need a picture of them for Instagram), but it’s really best to do it monthly. If you’re unsure of the ins and out of cleaning your plants, I have an article about it here.

They’re not fussy, but in order to make your life easier, it’s best to pick a well-draining potting mix. If you use just house plant potting mix you won’t have to water as frequently, but you’re far more likely to have your plants succumb to root rot.

My peperomia is in a mix that’s 2 parts house plant potting mix, one part perlite, and one part orchid bark. You can leave out the orchid bark (I like it because it adds a bit of nutrition to the soil as it breaks down), but I wouldn’t recommend skimping on the perlite.

What type of pot do Peperomia need?

As long as it has a drainage hole, your peperomia won’t mind, but I suggest that all overwaterers put their peperomia in terracotta, because the water can evaporate through the sides of the pot.

It’s important not to put your peperomia in too big of a pot. Whilst no plant likes to be truly pot bound, peperomia don’t like to have a lot of wiggle room. To much soil can lead to too much water retention and eventually root rot.

How to propagate Peperomia

A lot of peperomia are really easy to propagate by stem or leaf cutting.

To propagate from a stem cutting, cut off a bit of stem a couple of inches long, remove the bottom two leaves, and put the cutting in a propagation vessel, making sure that the right end is in the water.

Leaf cuttings are done in the same way, except you only need to take a leaf. Choose one with a long petiole, so that if you get rot you can cut it back a bit.

Make sure the propagation vessel is clean, and use lukewarm water – preferably rainwater, but I’ve successfully propagated peperomia using tapwater.

You can also propagate your plant by sticking (the right end) of the cutting back in the soil next to the mother plant. I do this with the leggy winter growth of my peperomia hope.

No, but it’s probably not a good idea to leave them within the reach of kids or pets.

Yes – many species bloom pretty readily indoors, such as peperomia rosso and peperomia caperata. Whilst the blooms look pretty, they’re typically kept for their foliage.

How much do peperomias cost?

I got my peperomia hope baby for £1 from Morrisons, so you can pick them up pretty cheap. However, there are over 1000 species presently recorded. You can bet your ass that some of them will be super-pricey. I’ve done some googling, and this is what you’re looking to pay for peperomia:

Have a look at my resources page – there are loads of Etsy shops that stock Peperomia. Check out this post for my top 20+ Etsy shops

Dear god, look at the dust on that.

To be perfectly honest, I’m not the world’s biggest fan of peperomias. I absolutely get why some people love them (they’re cute as hell), but I like a bigger, more foliage-y plant.

I go back and forth with Watermelon peperomia all the time. I see a picture of one on Instagram, decide to get one, go to the garden centre, and decide they’re not for me. It’s weird.

The issue is that I don’t have the light to do them justice. Nvm.