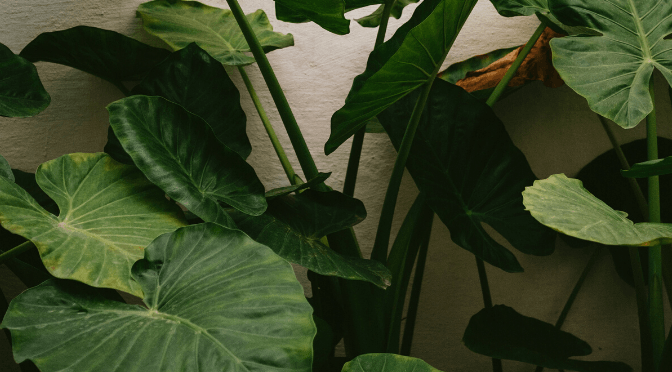 I have a bit of a soft spot for Alocasia. They’re big, beautiful, divas, and I’m always on the hunt for more, despite them being kind of a pain in the bum to care for.

If you get one, you’ll be at its constant beck and call. It will read 7 on the moisture metre one day, and then 2 the day after.

It will put out a new leaf, only to shrivel up a month later, then put out a perfectly healthy one later, even though nothing has changed.

Not for nothing does Kaylee Ellen call it the 8-mile plant.

You will love them anyway. I don’t know why.

Where do Alocasias come from?

Alocasia are found in the wild in southern Asia and Eastern Australia.

Where should I put my Alocasia?

Alocasia are notorious for diva-like behaviour, o make sure you don’t put it anywhere near a draught. Mine live quite happily on my kitchen table and on my mantlepiece, far from any doors or windows that are regularly opened.

Here are my alocasia:

What kind of light do Alocasias need?

Bright, indirect light. Alocasia will not tolerate medium to low light, but they can also suffer from sunburn.

They don’t require conditions that are particularly difficult to provide, or different to other tropical plant BUT like anthuriums, they won’t tolerant suboptimal care.

If you only have medium-light available, try it out with a grow light.

What level of humidity do Alocasia need?

Alocasia like to have humidity levels of at least 60%, but would prefer 70% in a perfect world.

As I’ve mentioned I don’t run a humidifier, but my living room tends to stick at the 60% humidity level, and my Alocasia seem fine.

Occasionally it drops to 50%/55% and my Alocasia didn’t seem to mind, but I don’t think it would grow well if the humidity was 50% all the time.

How to water Alocasias

If you’re a serial underwater, go for a larger specimen in a big pot, because they tend to dry out slower, and be more forgiving.

Alocasia can be weird when it comes to watering – I notice this more in my Stingray than Zebrina, but it’s definitely a thing.

Basically, check your Alocasia regularly, at least weekly, more in summer. A moisture metre will become your best friend.

Just save yourself the bother and get one.

How to fertilise Alocasias

Alocasia are known to be pretty hungry plants, so use whatever fertiliser (I use liquid seaweed) once a month. I don’t actually know how delicate their roots are, but it’s always good practice to water the plant prior to fertilising, to avoid root burn.

If any plant is going to get root burn, it’ll probably be your most expensive alocasia.

I’ve actually never had a pest problem *TOUCH WOOD* with any of my Alocasia. They’ve known to get mealybugs, scale, aphids, and spider mites.

Don’t let any pests get near your precious alocasia. Dust them regularly – I spray mine with a solution of dish soap, neem oil, and water, and then wipe them with a cloth. Make sure to get the underside of the leaves.

The bit where the leave meets the petiole is a favourite place for bugs to chill.

This aroid potting mix is ideal, but house plant mix with some added bark, coir, and perlite will work pretty well. Since they’re a hungry plant, add worm castings if you’re likely to forget to fertilise.

What type of pot do Alocasias need?

Alocasia likes to be quite snug in their pots, so I haven’t repotted any of mine. Since they like their soil to retain some moisture, I would go for a plastic or ceramic pot rather than terracotta, unless you think you’re likely to overwater.

How to propagate Alocasias

Alocasia have corms (like bulbs), and you can propagate them by division.

My Alocasia Amazonica corm is currently in soil awaiting a miracle. I bought it for £2.99 because it was growing horizontally out of the pot, but it was doing well – it put out a new leaf and then bloomed.

Then, tragedy struck. I left it in my trusty tray of water to bottom water, and it fell over (some would say my boyfriend knocked it over, but he felt so bad we’re going with the ‘it fell over’ line, though the fact I mentioned it here suggests I’m feeling some residual animosity).

Like, the top fell off. The good bit, with all the leaves.

So now we wait. But I think it got too wet. Oh well.

By the way, Alocasia Amazonica leaves look amazing when they’re, ahem, coming to then end. They turn an incredible array of colours, second only to Philodendron micans when it comes to providing a colourful autumnal display.

Well, actually not all of them. In fact, some of them are bred for their edible corms. Don’t try it though.

Whilst it is true that Alocasia can drop all their leaves in winter, only to grow new leaves again in the winter, it isn’t a done deal.

You see, Alocasia practice something called consequential dormancy – in layman’s terms (because I don’t know the fancy words), the alocasia gets too cold, has a massive hissy fit, and drops all it’s leaves. It will now sulk until spring

But it isn’t inevitable.

None of my Alocasia went dormant. I mean my Zebrina hasn’t put out any new growth, and my Amazonica snapped (and not in the good way) but my stingray has put out two new leaves.

Ok, don’t tell him I said this but the new leaves are very…winter growthy. They’re tiny compared to the others, and the one it put out in January has all but shrivelled up. But it definitely didn’t go dormant.

If you want to know how to stop your plants go dormant, I have a whole post on it here.

I’m desperate to add a Dragon Scale and a Frydek to my collection, but alas, I’m not made of money. Especially not when the plants seems to decide whether it lives or dies entirely at random.