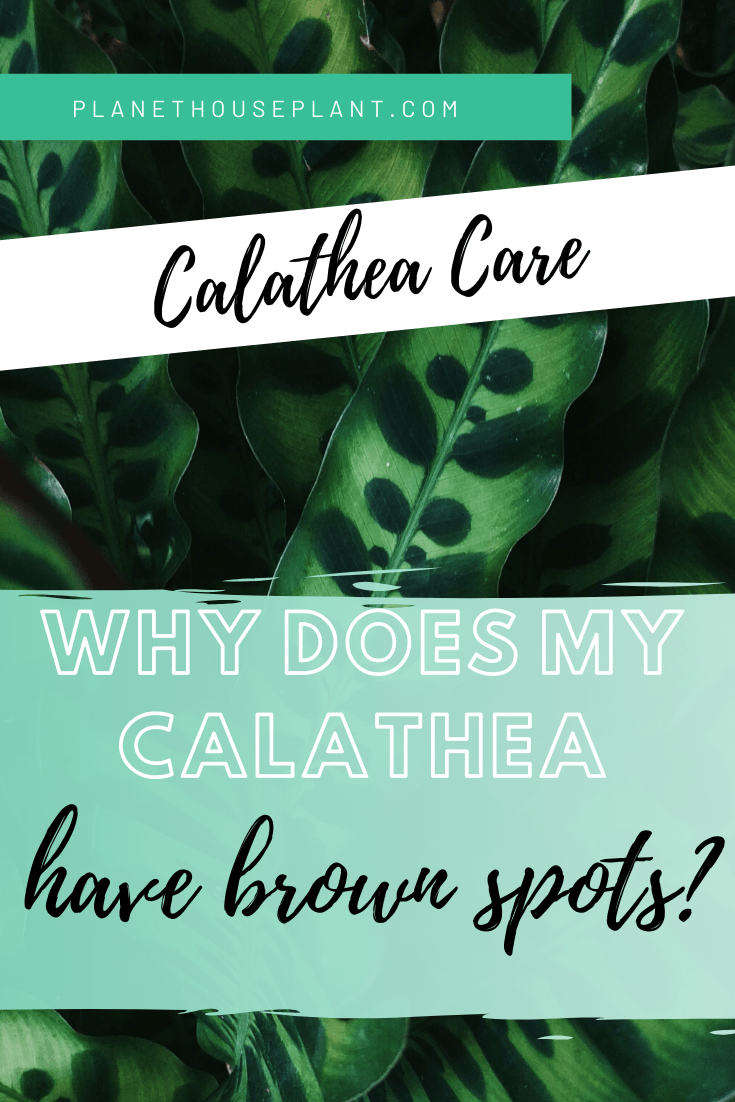 Your Calathea probably has brown spots because either your home isn’t humid enough or you watered it with tap water.

We love them so so much, but they freaking hate us.

I have a full Calathea care guide here.

I have a lot of Calathea, and they do pretty well in my house (although I’m currently dealing with a spider mite situation). I still get the odd crispy leaf and brown spot though. It’s part of house plant life. If it makes you feel any better, wild Calathea also et brown spots. Tis life.

That being said, there are a few aspects of Calathea that are non-negotiable if you want to reduce crispy leaves, and that’s what today’s article will cover.

Calathea get brown spots if your humidity is too low

This isn’t a case of Calathea preferring high humidity. There is no wiggle room here. If your ambient room humidity is 55% or less, get a humidifier.

I recommend this one – I don’t have it myself, but it’s the one that gets recommended time and time again by plant people. It has warm and cool mist, a large tank, and it’s quiet.

Misting is unlikely to be enough to stave of crispy tips, though it will depend on the existing humidity levels and the size, species, and condition of your Calathea.

In my experience, smaller Calathea are less forgiving of suboptimal conditions, whereas the larger ones are less picky.

Calathea get brown spots if you give them tap water

Calathea hail from damp, water-abundant areas, so they can afford to be picky about water quality.

Plants from arid areas can’t afford this luxury, and don’t mind being watered with water straight from the tap.

I would recommend using rainwater on Calathea if you can get it, but they also seem to be perfectly happy with aquarium water.

Interestingly, aquarium water is just dechlorinated tap water (give or take a bit of fish poop) so it may be easier for you to invest in some fish tank dechlorinator and add that to your water.

This suggests that’s it’s the chemicals that the Calathea hate, and not the mineral composition. Don’t use water softeners on your plants. It’ll kill ’em.

Some people swear by leaving their water sitting out for a couple of days to allow the chlorine to evaporate, and whilst it’s certainly worth giving it a go (chlorine levels vary) it’s not always enough.

Getting a water filter is an option, but the hippy in me doesn’t like the excess plastic. I also have a lot of plants and go through a lot of water, so it would be a bigger undertaking than I’m willing to, er, undertake.

Calathea don’t like cold water, and it can cause brown spots

Room temperature is best. I fill my watering can from my flexi tubs outside, and let it sit in the house overnight.

Sometimes I forget and add a little bit of boiling water from the kettle. It doesn’t seem to have done any harm.

Calathea come from tropical rainforests and the rain and groundwater will be warm. Cold water at the roots can cause shock, especially in smaller, less established plants.

To be honest, I’ve accidentally (i.e. been too lazy to warm the water) watered with cold water before and I’ve have no fatalities, but I see the odd brown spot and wonder if that was the cause.

I water my Calathea when my moisture metre reads 3 (or maybe 4). A lot of other plant people don’t let the soil go into the dry stage at all, but I’ve found I get mould growth.

Not that mould growth is necessarily a bad thing, but it can encourage fungus gnats.

I’ve found that Calathea hold grudges. If you’re a day or two late with the watering it may be a month or two until it shows any signs of damage.

Some Calathea are more forgiving than others. Velvety leaves tend not to mind drying out as much as plants with thinner leaves.

Calathea don’t like draughts, and they can cause crispy leaves

Interestingly, not all draughts are the same.

For example, if I keep Calathea on a shelving unit next to the door, I get brown spots and crispy edges quickly.

Yet I keep four Calathea in front of my fireplace and they love it there. I think because the chimney draws out the warm air and creates a little warm breeze for them.

Calathea in general don’t like to be cold. Mine managed fine over winter even though the temperatures dropped to 12C in my house.

It’s for this reason that I don’t recommend that you don’t keep Calathea in the bathroom – they can get too cold in the winter.

Obvs if you live in a hot climate year-round go ahead and put your Calathea wherever you like, but I personally don’t have any plants in my bathroom over winter.

Calathea don’t like too much sun and burn easily

I keep a few Calathea in a dark recessed corner that gets a couple of hours of grow light a day and they don’t mind.

They don’t mind a bit of dappled light in the morning, but they crisp up quickly if they get too much light.

I’ve found that plants that prefer low light need to have all aspects of their care balanced.

They might do ok in brighter light IF they have really high humidity, and your watering schedule is perfect.

It’s easier to keep your Calathea consistently moist if you don’t expose them to bright light AND you have high humidity.

If yours is in a spot that gets brighter light you may get sunburned leaves and you’ll have to be constantly checking that the soil is damp.

Which is weird because spider mites HATE humidity. But they love the thin leaves.

If you notice brown patches on your leaves, dampen a piece of paper towel and rub it along the underside of the leaves. If you get a brown/orange residue, you have pest.

Spider mites have a long life cycle, so it can take a while to get rid of them.

Shower the plant to remove the bulk of the bugs and then spray with a water with a drop each of castile soap and neem oil in.

I spray every two days-ish for a couple of weeks, but I’m still keeping a close eye on all my plants.

Yes, it is a ballache.

Spider mites also make the purple underside of the leaves come away. Weird but true. It only happened on my Stromanthe, but when I wiped the leaves the paper towel was covered in purple streaks.

Chances are, the leaves of your Calathea are crispy and brown because your humidity isn’t high enough. Get a humidifier. In the case of Calathea, it’s not always an optional extra.

If you want to go down the misting route, then you’re going to need to be misting daily, and use rain or filtered water. Ask for a humidifier for your birthday. All of your tropical plants will love it.

Oh, and don’t use tap water. Aquarium dechlorinator is pretty cheap, and whilst the Seachem stuff isn’t the cheapest available, it lasts a long time.

My boyfriend has kept tropical fish for 20 years, and he swears by Seachem Prime.

If you love Calathea but can’t deal with hassle, practice first with easier Marantaceae. Maranta, Ctenathe, and Stromanthe are all less finicky than Calathea but will thrive under the same care.

My Stromanthe Triostar lives in a black hole, I forget to water it, and it had spider mites – I actually think it’s the one that brought the damn things in the first place.. It’s fine. Can recommend for beginners.

Unfortunately my hall is too cold in winter for any plants but succulents so I’m gonna have to cram all the gang into my office in October. Wish me luck.