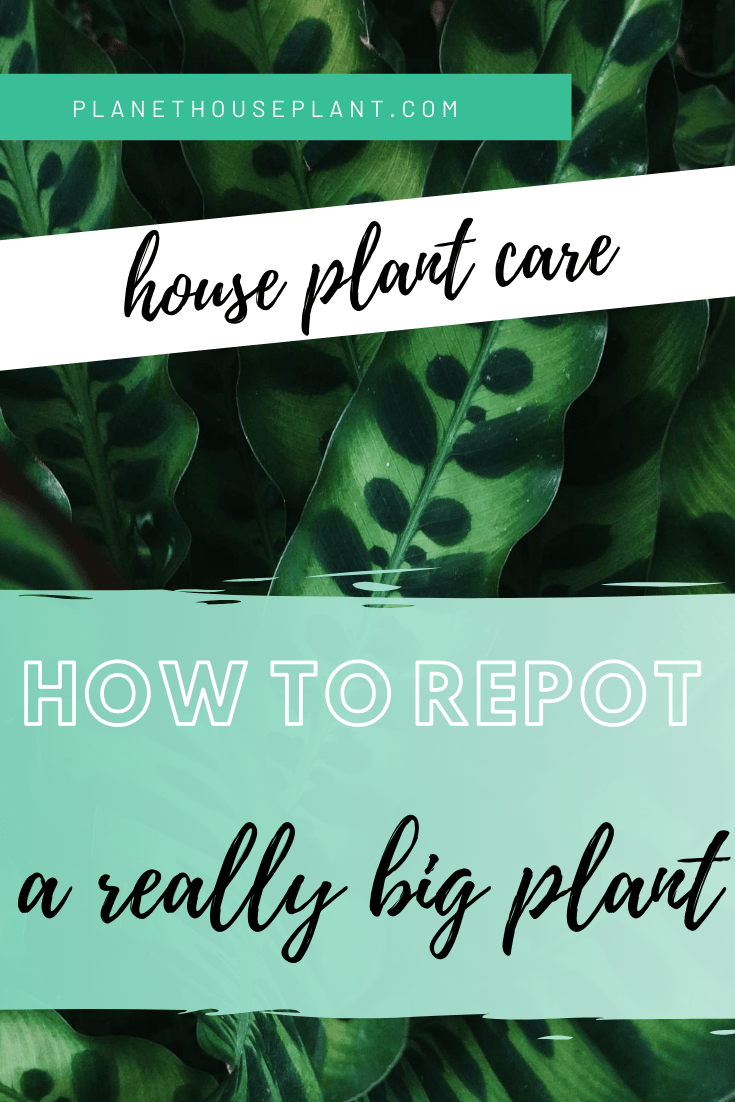 Repotting a behemoth of a plant is not easy. And the one I need to repot was a Philodendron scandens (or heartleaf philodendron).

I considerable experience in repotting large cacti, but that isn’t what this post is about. If you are repotting something spiky:

Ok, onto repotting my scandens.

Before you start repotting large plants

Ideally, a couple of days before (so it’s moist but not dripping everywhere). This is NOT 100% necessary, but I think it makes things easier.

Often when repotting big plants you need to arrange them to keep everything where you want it – especially if you’re trying to bulk out a pothos by pinning the vines into the soil.

The last thing you want is water shifting everything around, or the root ball floating out of the new soil mix. Water the plant and moisten the new soil before moving anything.

I never do this an inevitably have to run out to the shed in my pjs and my boyfriend’s trainers to get a new pot or some bark or something.

Make sure you have:

Here is our victim subject, in all her glory above my aquarium:

To the left you’ll also see a bunny litter box, and at the bottom you can see the peace lilies we grow in the aquarium.

As you can see, the philodendron is a bit of a monster. My boyfriend bought her for £19.99, and she desperately needed repotted then, but I never got round to it/couldn’t find a big enough hanging pot.

The root looked like this when she came home:

They’re perfectly functional, but are a bit sad and dry.

When I removed the pot, I was treated to this situation:

That’s a lot of roots.

It actually wasn’t as bad as I thought it would be, I think because once the roots starting coming out of the drainage holes, they stopped wrapping themselves round the inside of the pot.

Whilst I was as gentle as I could be when I removed the pot, a lot got snapped.

You see, a lot of the roots that were protruding through the bottom of the pot had actually re-entered the football through another drainage hole, so they were attached to the plant at both ends.

I guess I could have spent hours delicately untangling everything, but I chose the scissors option for ease and speed.

Another option would have been to break the pot, but I have a lot of philodendron and only one pot (that was already earmarked for one of my ferns).

Let’s face it: this plant is a survivor. A couple of snipped roots won’t bother her one iota.

She’s been upgraded to this pot:

It’s pretty much impossible to find indoor hanging pots where I live, never mind huge ones, so this is an outdoor pot.

Unfortunately, the hook is a bit big for our stand, so the plant is currently gracing the top of our kitchen cupboards.

The pot is only a few inches bigger than the original.

Shock is a major issue when repotting plants, and I’d already snipped some roots – going from totally rootbound to drowning in soil may be a step too far.

You’d think that plants would appreciate the room to stretch their legs, but they don’t. Most plants like to be snug in their pots.

I have to confess to not using the best potting mix for this plant.

I’d been doing a bit of repotting, and moved a couple of plants over to semi-hydroponics (stay tuned for an upcoming post once I’m convinced they’re not all going to die!).

I hate wasting soil, and whilst best practice is yo either chuck old soil or get rid of any pests by heating it in the oven, I confess that I did neither.

So the old soil just got shoved straight in with the new philodendron.

My soil mix recipe is in this post, but it’s basically coir, bark, charcoal, perlite, and worm castings.

There’s also a bit of moss that had come with the scandens as a top dressing that I mixed in with the soil too.

Advice is often to tease out some of the roots when repotting, but since I’d already damaged them getting them out of the pot I just dumped the root ball in the new pot and worked soil around the outside.

I prefer to moisten the soil before adding it to the plant. I just think it’s easier to moisten soil in a box than water a huge plant.

Here she is after being repotted.

As you can see, she’s pretty healthy, despite being so rootbound – if you look carefully you’ll see dozens of new leaves emerging from their cataphylls.

You can also see that the leaves at the bottom of the vine are smaller than the top ones, and that’s just what happens – if you want to get progressively bigger leaves you’ll need to train your plant up a pole rather than have it trailing (and give it a tonne of light and nutrition).

It shouldn’t need watering if you watered it a couple of days prior and moistened the new soil.

If possible, repot your plant near to where it’s going to live to minimise movement when you put it back.

But yeah, give it time to settle down. It’s had a big disruption to its life, and needs to heal its wounds. Leave. It. Alone.

You may notice that a couple of old leaves drop, or any emerging leaves blacken off and die – this is totally natural.

The plant is putting more energy into healing itself, and may have slowed production in other areas.

It’s also common for the next few leaves to be on the small side, or spaced further apart. Try not to worry.

How long does it take to repot a massive plant?

In this case, it took me about ten minutes since I already had the potting mix ready.

It could take hours if you’re more delicate than me and want to unpick the roots. You might want to do this if the plant is delicate/valuable, but as a rule, if a plant is super rootbound AND still growing well, it won’t miss the odd snapped root.

By the time I’d finished, I had a good amount of snapped roots, and the plant is a-ok.

I keep a close eye on my more expensive plants (ok, plant – just my Thai Constellation) so I can repot them before extreme measure with scissors may be needed.

Big plants like this philodendron tend to be healthy specimens.

In my experience large plants are far hardier than small ones, and they can take a bit of snappage and damage. If any parts do drop of, you can always propagate them.

Also, don’t panic about them being rootbound. They’ll be fine.

This plant could have lived happily this way for a long time. As long as I water and feed it; it won’t care.

I only repotted it because it was a ballache to water and feed it. I did this for me, not the plant.

So if you don’t have the time or can’t find a pot or whatever, a few more months won’t hurt it.

Even cactus can recover if you lop a large part of them.

Plants are, in general, great at surviving physical damage.

They have to be, in order to survive, for example, a goat eating all their leaves, or a meteor squashing them.

It’s just not something they’re designed to experience. So if your plant is looking a little sad after repotting don’t panic.

That being said, there are easy ways to minimise the risk of shock that you should consider:

I’ve learnt my lesson in this regard, and no longer keep enormous, heavy plants. But if I did, they’d all be on wheels. Otherwise they’re just too awkward to do anything with.

If you need to lift heavy plants, don’t do so on your own- enlist a friend. If your plant is so heavy and unwileldy that you don’t know where to start, I’d ask a garden centre how they move theirs, or ask someone on Instagram with a similar plant.

I put off repotting this plant for a long time because it seemed like a massive chore, but actually it was fine.

Sure, some leaves and roots got lost, and she doesn’t fit where she used to, but all in all you wouldn’t know she’d been repotted (especially since you can’t actually see the pot).

I am a little worried that I’ve inadvertently caused a growth spurt and my kitchen will turn into some kind of Jumanji-esque situation, but I suppose I can always cut her back (in the dead of night, when my boyfriend can’t see, because if were up to him she’d be growing all round the walls).

2 thoughts on “How to repot a really big plant”