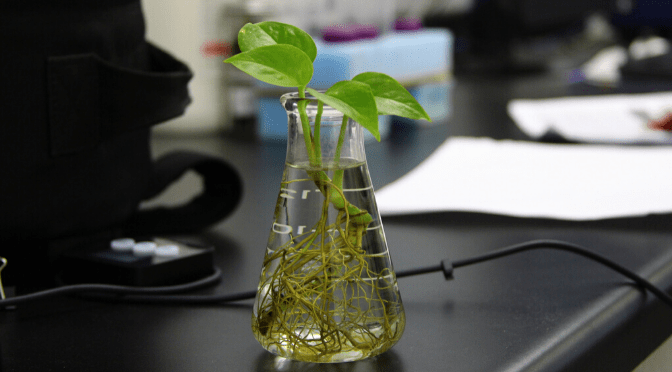 Ok, before we start: no plant truly prefers being totally root bound. Why would they? It’s not something that’s likely to happen in the wild, so they can’t deal with it.

That being said, there is, if you didn’t already know, a WORLD of difference between living in the rainforests of Indonesia, climbing a tree, and chilling in the back bedroom of a bungalow in upstate New York.

Many plants that we keep indoors are semi-epiphytic, so they’re not used to having their roots in soil, never mind shoved in a pot.

So before anyone gets sniffy about the title, no plant likes being totally pot bound. On we go.

What does rootbound mean?

Grab a plant, take it to the sink, turn the pot on its side, and gently ease the plat out of its pot. If you can see the roots circling around the outside of the rootball, so that they form the shape of the pot, your plant is rootbound.

There are varying levels of rootbound…ness so don’t panic if you can just see a couple of rotations of roots around the soil. It’s only when you can barely see the roots for soil that you really need to sort the situation out.

One of the earliest signs that a plant is rootbound is that it’s displaying all the signs of being underwatered. Roots have displaced the soil so the plant can’t hold onto as much water.

How does being root bound harm a plant

There are a couple of reasons that rootbound plants suffer:

The soil we use is designed to hold water. Actually a little too much water, which is why I recommend either making your own potting mix or cutting pre-made house plant soil with perlite and orchid bark.

But if your plant is rootbound, the roots will have displaced some of the soil the soil – the more rootbound your plant is, the less soil you’ll have.

Therefore, when you water your plant, there won’t be much soil to hold the water, and the water will drain through, before the roots have had a chance to soak any up.

Similarly, the lack of potting mix can mean your plant lacks vital nutrients that it would normally get from the soil, either from the soil itself or from when you fertilise it.

Other issues that stem from a plant being root bound are:

If the roots can grow any more, and the plant can’t get enough water and nutrients, growth rate will slow and/or stop.

Anyone that’s ever tried to untangle a string of pearls or chain of hearts will know just how delicate plants are.

It’s less stressful for to damage roots rather than the leaves because once the plant’s repotted we can pretend it didn’t happen, but it’s far more stressful for the plant.

Plants grow their roots and leaves in such a way that they support each other – a plant can replace damaged leaves quickly if its roots are fine, but it’s harder for a plant to support the same amount of foliage if its roots are damaged.

But this is really the crux of the article, because whilst most plants don’t like to be rootbound they REALLY hate having too much space in a pot.

In the wild, plants have to compete for space if they grow on the forest floor, and the epiphytes won’t have their roots in soil at all.

SO many plants like to be snug in their pots.

Not root bound as such, but also not with a lot of extra soil.

So by now you know what I mean: which plants like to be snug in their pots, and will suffer if they’re potted in a pot that’s too big:

Hoya usually grow as epiphytes, and really like to dry out between waterings. Both these factors mean that they don’t need repotting until you notice that their roots are wrapped around the inside of the pot, or you notice that it needs watering more often than usual

Peace lilies benefit from being snug in their pots – I assume it’s because they like to be kept moist but not met. If they had too much extra soil they would quickly get root rot.

Philodendron, epipremnum, and pothos are happy to be snug in their pots for the same reason as hoya. They naturally grow on trees, so need a chunky, well-draining soil to avoid root rot.

If you can only provide them with house plant potting soil, make sure they don’t have too much excess space in their pot because we don’t want (altogether now) root rot.

Succulents and cacti rarely need repotting because they tend to have very shallow root systems. I wouldn’t recommend repotting them until you see roots coming through the bottom of the nursery pot.

It’s imperative that you let the soil dry out before watering succulents. Some experts even dry off the soil with a blowdryer to ensure that the plants don’t get root rot.

Having your plants be a little snug in their pots will help the soil dry out before rot can set in.

Again, no plants like being root bound. But I couldn’t find any that like a lot of room to grow.

That being said, there are plants that I’ve put in pots that are waaay too big, and they’ve survived. I wouldn’t recommend it though. These include:

Not that I’m condoning this, but larger plants tend to be more forgiving of smaller plants when it comes to being put in too-big a pot. This is an observation, so if you’re unsure, wait until you have a suitably sized pot.

Why can’t I just pot my plants in huge plant pots?

Potting your plant in a pot that’s too big for it is more likely to kill your plant quicker than keeping it rootbound.

As a general rule of thumb, only increase the pot size by an inch or two when you’re up-potting it.

Putting your plant in a pot that’s too big for it will mean that most of the pot is filled with soil. The soil then holds onto more water than the plant needs and this can lead to root rot.

Potting your plant in a pot that’s too big is just overwatering by proxy.

This is the kind of situation that you don’t envision happening to you, nor could you fathom how one could get into such a situation. Surely you can repot any plant?

Well , with the aforementioned cactus, it’s too big and pointy to repot.

The spines are over an inch long.

I haven’t watered it at all this year.

The soil is at about a 2 on the moisture metre scale so I put rocks on top of the soil and left it. It’s not wet enough to get root rot and not dry enough to die. Tbh, I wouldn’t be too bothered if it did die. It’s too fookin BIG. And spiky.

My other not-repottable plant is my infamous £20 philodendron Scandens.

Yes, it looks cool, yes it was under £20 but by GOD it’s a pain in the arse to water

It’s not rootbound, because its roots are coming out of the bottom of the pot. However, they’re spiralling round and we can’t entangle them. It’s locked in their, unless we break the pot.

I could break the pot, I guess, but I can’t source a bigger hanging pot. I haven’t looked very hard tbh, because it’s an epiphyte. So long as I can get water and nutrients into it, I’m good.

It’s currently putting out about a dozen new leaves. Mental.

I leave mine to soak all day, giving the plant ample time to soak up the moisture it needs. I probably only do this monthly, so it can clearly soak up plenty of water if given ample time.

If the bunny poop fertilisation strategy is a success I’ll be buzzing. It’ll make my fertilising schedule MUCH easier.

I’ll definitely do a post on this if it works. And then start selling bunny poop on Etsy.