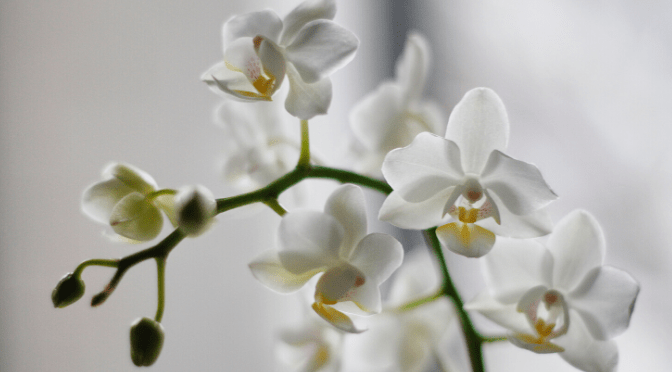 Where do orchids come from?

Where don’t orchids come from?

It’s one of the two biggest families of flowering plants, the other being the daisy, aster, and sunflower family, Asteraceae.

To put that into perspective, there are twice as many different kinds of orchids as there are birds.

It also makes doing care posts for them quite difficult (or extremely time-consuming and the length of a dissertation), so I’m going to tackle the tropical ones typically found in the hobby.

But yeah, barring Antarctica, orchids are found on every continent.

Where should I put my orchid?

Orchids would really like an east-facing window, or south-facing if you cover it with a sheer curtain. West-facing windows may cause your plant to become sunburned.

Don’t let your orchid touch the glass – in winter this can cause the leaf tips to freeze, but it can cause brown leaf tips even in summer.

We’ve already established that orchids like bright, indirect light, but how much?

It’s a general rule of thumb that orchids would like at least six hours of indirect light a day.

However, you can give them too much light, and you can tell if you are by looking at the colour of the leaves. You want your orchid’s foliage to be a pale, grass-toned green. A deeper, more emerald tone suggests that your plant is getting too much light.

If you suspect your orchid is getting too much light, then move it a couple of feet back from the window. If the leaves are too dark, it’s an indication that the light is too bright for your orchid to bloom.

In order for your plant to produce healthy foliage and bloom, it requires a temperature drop of about 15 degrees at night.

Your orchid won’t necessarily die at these temperatures (most types are fairly hardy), they just won’t thrive and bloom.

It would seem that all orchids love a bit of humidity, even those that are known to live in almost desert-like conditions in the wild. A range of 40-70% humidity will do.

Air movement is important to orchids, so in summer you might like to put them near a window, or a fan. It’s less important in winter, as the air movement is a way for plants to deal with the humidity, and it’s less humid in winter.

Don’t worry too much about air movement, unless you’re growing orchids commercially.

A word I across a lot in my research was ‘buoyant’. That’s the kind of atmosphere your orchid wants.

Think of a close, sticky, humid summer’s day – Buoyant is the opposite of that – a nice breezy, balmy evening.

How to water your orchid

A lot of orchid aficionados prefer to gauge when to water their plant by weighing them. They let the orchid go dry and weigh it, then weigh it again after watering.

When your plant gets near the dry weight, water it.

I use a moisture probe, but I also look at the pot – the nature of orchid potting mix makes a moisture meter less useful than with other plants – if I can see some remaining moisture, I leave it a day or two.

Orchids are as prone to overwatering as other plants, and they have big thick roots that will rot quickly.

It’s recommended that you water your orchid in the morning, to make sure the leaves are dry by nightfall. I believe this reduces the risk of rot and fungus growing.

I like to soak my orchids in the sink in lukewarm water for about twenty minutes, and then let them drain. If you’re top watering, let the water run through the pot for a good 10-15 seconds before letting it drain. Don’t let the plant sit in water.

The American Orchid Society advises against using distilled water, and they seem like they know their stuff. Not that I’ve ever used distilled water, but if you do for your orchids, don’t. (source)

How to fertilise your orchid

The AOC (link in the section above) have a whole list of things to look for in an orchid fertiliser, which you may like to check out.

However, I personally will use a specially formulated orchid fertiliser.

I’ve not fertilised mine yet, because it currently has the dark, succulent leaves of an unhappy orchid. It was overwatered by its previous caregiver and is very slowly recovering.

You know the rules when it comes to fertilising

Orchids are often on sale in garden centres, and you NEED to check them.

About 50% of the time, the plant will have mealybugs. Check the bloom, at the back. They so often have colonies living there.

I know it’s hard to pass up the opportunity of getting a beautiful plant for £2 but it isn’t worth it, I promise.

Orchids are prone to lot of bugs and ailments – certainly all the main ones like mealybugs, scale, thrips, and aphids. Keep their leaves dust-free, and wipe them with a neem oil solution to ward of ant potential pests.

Orchids are epiphytes, so they grow on trees, rather than in the ground. They like to have light and air around their roots – I believe the roots are able to photosynthesise, but maybe that was a dream. (ed: it’s true – it wasn’t a dream).

I personally buy orchid bark to pot orchids in, shocking as that sounds. You can make up your own using a combo of bark, sphagnum moss, and perlite.

Your orchids want something that’s very airy and well-draining. If you have some bark, perlite, and moss lying around, mix ’em up and see how your orchid likes it.

What type of pot should I keep my orchid in?

Orchids are often sold in clear pots because, as I previously mentioned, they use their roots to photosynthesise. You can get glass pots with drainage holes, but they’re pretty hard to come by. If you see one, snap it up!

It’s not imperative that you grow your orchid in a pot in traditional potting medium – some people out there that are cleverer than I mount them onto driftwood and other wooden stuff they find.

I don’t trust myself to be diligent in a) cleaning the wood properly and b) keeping the orchid moist enough. I’m assuming they spray the roots but it seems like you’d have to do it fairly often.

A lot of orchid’s roots are pale green and firm when they’re at their optimal health, so I suppose you judge when to mist by that, but it seems like a hell of a lot of effort. Unless you just submerged the whole thing?

Comment below if you’ve been down the whole mounted orchid route and give us some more information.

I mean, don’t give them to your pet as a tasty snack, but if kitty accidentally snaffles a gobful, she’ll most probably be absolutely fine.

Bear in mind that they haven’t all been tested for toxicity though.

How to propagate orchids

Conveniently, they produce little plantlets on their own, adorably called Keikis, which means babies in Hawaiian. Simply wait until the keiki has a couple of leaves and well-established root, before potting it up separately.

You can root divided large orchid plants too.

You can propagate some orchids from stem cuttings:

Make sure your piece of stem has a couple of nodes on it, coat the ends in anti-fungal powder (apparently cinnamon works for this), then lay it in a tray of sphagnum moss.

Wrap the tray in a plastic bag and leave in a brightly lit, warm place. Keep it moist by misting it regularly.

Maybe this is one I should attempt next year.

2 thoughts on “Plant profile: how to care for…orchids”