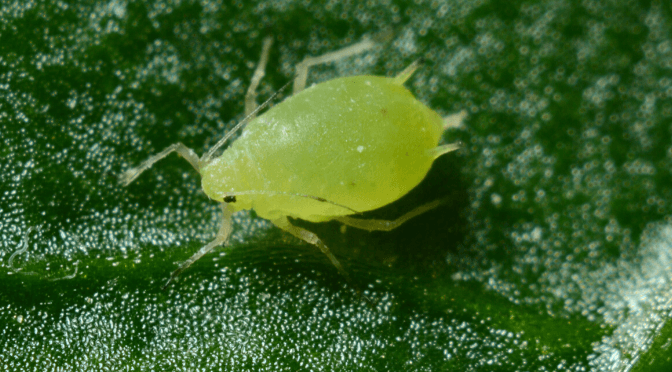 I actually got a picture of an aphid! Thanks, Unsplash! They’re gross!

I mean, I know you all know what aphids look like, but STILL.

My plants are currently battling aphids. I got a load on my string of pearls (it was very overwatered when I got it and they saw an opportunity, the swines), which then moved to my avocado plant.

There’s still get the odd one on the string of pearls but they’ve definitely moved on.

I sprayed both of these and thought I’d ousted them, but they turned up on my little pink Syngonium. He’s not looking too great, because he’s only young and didn’t really have the leaves to spare, but hopefully he’ll rally.

There are over 400 species, which come in a variety of colours. I believe, I have pear aphids, which are green, but black and grey ones are pretty common two.

Which plants do aphids prefer?

Although I picked a couple of my avocado plant and it never got any more. It’s a young thing too – I grew it from seed and it only has three leaves. I can’t shake them off the Syngonium though – they love it!

Where to look for aphids on your plant

Look on the undersides of leaves and stem tips. On my string of pearls they were covering the stems, and on my Syngonium, they were on the stems and at the base of the leaves.

If you see little white flecks, they could be the shed skins of aphids. Nice.

Some aphids have wings and some don’t, so if you see little green wingless bugs, they could well still be aphids. The baby ones jut look like smaller versions of the adults.

How do aphids get in?

They can fly. So they fly in. I mean, they could be on a plant when you buy it, but they’ll fly in too. Bastards.

But that’s not always possible, is it? Plants like a bit of airflow. Bloody bugs.

Even somewhere as cold as the UK, we have massive issues with aphids. I grew some tomato plants in my old house and aphids decimated them. I had no garden and lived in the centre of town.

Are they watching us on hidden cameras? Are they actually tiny aliens with better technology than us? It wouldn’t surprise me. Those things get everywhere.

What damage do aphids do?

Aphids love to eat new growth, so they can cause your plant to become stunted. They breed extremely quickly and can kill young plants before you’ve even noticed you have a problem.

In my experience, they make plants look thirsty – the leaves go brown and crispy (though not as noticeably as if they were underwatered) and just look a bit sad. Often by the time one has noticed that their plant is infested with aphids the damage has already been done and all you can do is chuck the plant to prevent the aphids spreading.

Remember the honeydew that mealybugs produce? Aphids produce it too, and it can cause sooty mould and fungus. Ants ‘farm’ aphids like they do mealybugs because they like to eat the sundew.

You can often spot aphids infestations in the garden or greenhouse because they’ll be attended to by ants. Well, not attended to, but there’ll be ants about, checking that their food source is kept safe.

Ew ew ew. But pretty impressive on the part of the ants. They’ll have invented the steam engine soon.

Aphids are also known to carry diseases from plant to plant. They are truly little shits.

What conditions do aphids thrive in?

I can’t find anything that details what conditions aphids prefer. All the plants I’ve had them on have had different needs – I keep my string of pearls dry, and my Syngonium a bit damper.

I don’t think they care. They do especially well in warmer temperatures though – to the point where if the weather’s nice and food is abundant the females can bypass the egg stage when they reproduce and bear live young.

An impressive trick, you’ll have to agree.

I think they prefer moist conditions to dry ones, but that’s only something I’ve observed in my house – the avocado is rooted in water, so there’s no moisture as such (water is not a favourite of most bugs, for they cannot swim. I don’t think).

Aphids are easy to see, so I favour picking them off and squishing them. I once spent a wild afternoon gently tweezing them off my sundew, which died anyway.

Hilariously enough sundews are a good way to reduce aphid infestations, but apparently mine was a bit overwhelmed.

As well as the usual spraying with neem oil or a solution of washing up liquid, you can dab aphids with a rubbing-alcohol soaked cotton bud.

This only removes the adults though, so I’d recommend you spray the plant every other day or so.

I’ve found aphids harder to get rid of than mealybugs (which apparently just disappear when you write a blog post about them and could do with a picture or two of them. Who knew mealybugs were shy?). They also kill plants quicker, so I’m having to check my Syngonium every day and pick off any bugs.

As we all know, ladybirds LOVE to eat aphids, so introducing a few beneficial insects can help to decimate your population.

Preventative measures to ward off aphids

Keep your plants healthy, and keep a close eye on young plants. Try dotting a few of those sticky yellow gnat traps around as a kind of early warning system. Since a single aphid can lay nearly a hundred eggs a week, infestations can occur quickly.

I’m at the stage now where I don’t think I’ll ever be completely rid of the aphids, but as long as I can shake them off my baby Syngonium, I’ll be happy. He’s lost a few leaves and is looking a bit sad but I have hope.

Feel free to leave any aphid-battling tips in the comments below. Thank you!