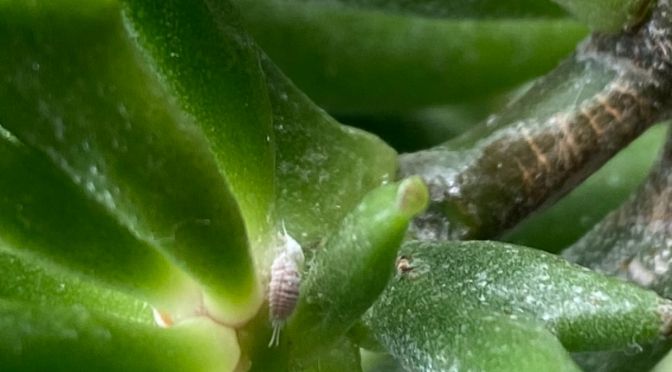 Mealybugs are one of the most common house plant pests, so it’s unlikely that you’ll never have to deal with them.

Plants can tolerate a small amount though, so don’t panic and throw your plant out if you spot them.

I don’t have a picture of mealy bugs, so for the meantime, you’ll just have to look them up on Pinterest. would you believe that there are no free stock photos of common house plant pests? I’m not paying £35.99 for a picture of a mealybug.

***Update*** I got mealybugs. Yay. Now you have a picture. And I have mealybugs. Well, not me, but my crassula. Cry cry cry.

Irritating enough I’ve just managed to rid a cactus of the little buggers. Never thought to get a mugshot.

Ok, so the picture that’s meant to be here sometimes doesn’t appear, nor does the featured image. I can only assume that the mealybug I took a photo of is in witness protection. If I’ve compromised him in any way, I apologise.

They produce a waxy secretion from special glands.

They also produce honeydew, like many tiny, gross bugs. Interestingly, ants eat this stuff, so if you have ants near your plants or in your greenhouse, the ants will try to protect the mealybugs to ensure a plentiful supply of food.

Don’t google where honeydew comes from. I did, and I wouldn’t recommend it. Just trust me that it’s grim.

There are several hundred species (250 in the US alone) of mealybug. Some of them are female only. The males are sometimes winged (if they have males) but are rarely seen. Nice.

Females can lay over 500 orange-pink eggs at a time, that they cover with the waxy white stuff.

Which plants do they affect?

Unfortunately, there aren’t many plants that mealybugs won’t turn up on.

They’re particularly fond of succulents and cacti (they use their sucking parts to extract sap, and I suppose succulents are very moist on the inside).

They also like African violets, hoya, and orchids, especially Phalaenopsis.

Where to look for them

I’ve spotted the brazen little sods just sitting on my cacti, but usually, they tuck themselves into crevices. If you suspect an infestation, look at the underside of where the leaves meet the stem.

Some species can also live below the surface of the soil and attack the roots.

What damage do mealybugs do?

As I said, they suck sap from the plants.

Small infestations don’t do much damage, but sometimes with really large numbers, it can be in your best interest to chuck the plant since you’re risking any others nearby. That’s a final resort though.

If you have a medium to a large infestation then the amount of honeydew they’re secreting can lead to sooty mould growing on your plant.

They can reduce the growth of the plant, causing it to be stunted, and can cause leaf drop.

I’ve also seen scarring on cacti that have had mealybugs infestations over long periods of time, but apart from not looking great, the plants are still growing well.

However, for farmers, it’s a different story – in warmer countries mealybugs can wreak economic havoc on crops. I don’t think it’s an issue in the UK, apart from in greenhouses.

Mealybugs aren’t harmful to humans, although in rare cases they can cause skin irritation.

How do you get mealybugs?

Mealybugs aren’t particularly mobile, so chances are you brought them in on a new plant.

It’s important to check for any sign of pests on new plants, but it’s not always possible to see them. If they’re still in the egg or larval stage you’re unlikely to be able to spot them.

Maybe a quick dousing of neem oil on any new plants will be my new welcome home present to them.

I’ve found them to be attracted to dying plants (that were dying before they got mealybugs) but I’ve not read anywhere else that this is a common thing.

Maybe they were trying to put it out of its misery.

Control and elimination of mealybugs

Measures you can take to prevent bringing in mealybugs

And that about wraps it up for my expose on mealybugs. Anyone else feeling a bit…crawly?

Mealybugs don’t necessarily mean a death sentence for your plant – it can easily tolerate a small infestation, so as long as you keep spraying it with your chosen form of bug spray every five days or so, your plant shouldn’t suffer too much (unless it has other woes besides mealybugs).

I can’t seem to ever completely eradicate mealybugs (apart from when I’m trying to get a photo of the damn things!) – one of my cacti has always had a small population – but that’s ok.

They’re one of the less aggressive pests available. To your plants. There aren’t any plant pests that are aggressive towards humans, that I’m aware of. I’d have picked a different hobby if that were the case.

Leave any questions in the comments, and come back tomorrow for our expose on thrips!