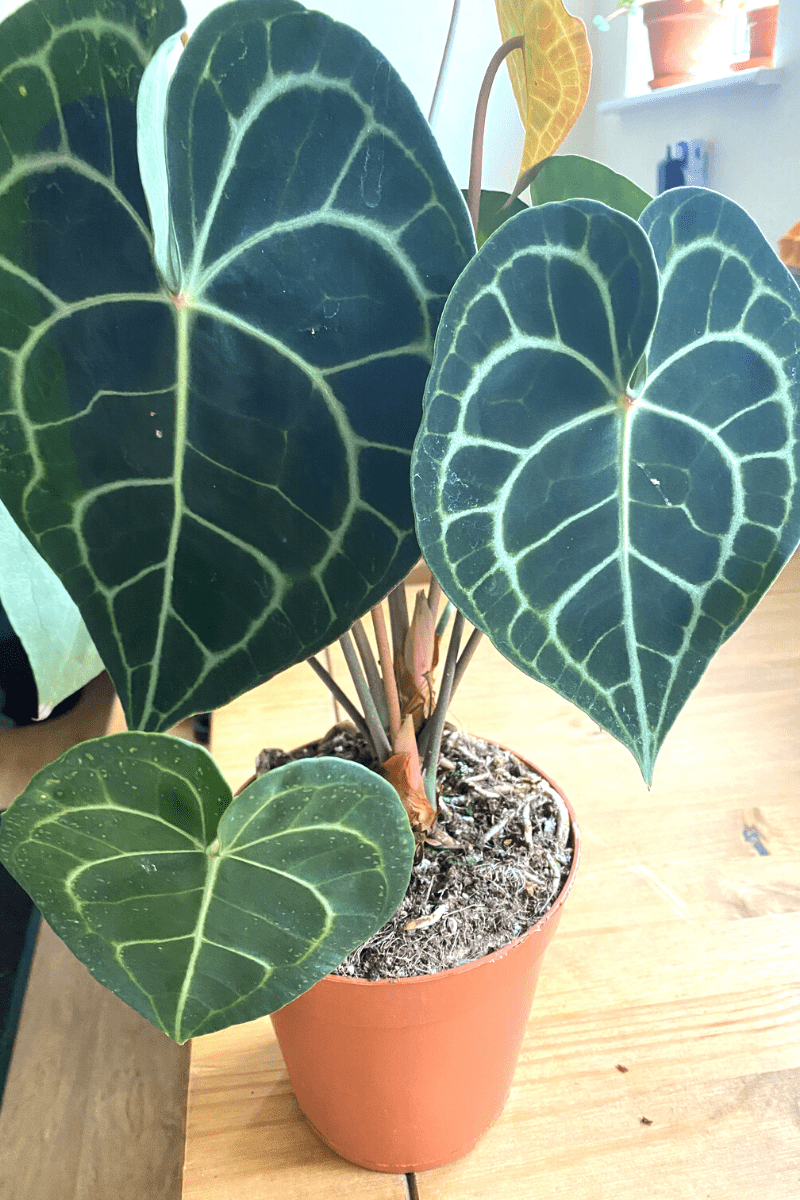 House plant bloggers that can’t be arsed to take their own photographs: search for ‘anthuriums’ on Unsplash. There are so many good photos of house plants available that don’t come up when you just put in ‘house plants’ or ‘indoor plants’.

Also, if anyone has any idea why I have two different pest management companies from New Zealand leaving comments on my post, please let me know. I don’t mind, I’d just like to know.

I don’t own any anthuriums. I’m desperate to get one, but I want to wait until the Spring. I’m also going to brave dieffenbachia again since I’ve killed everyone I’ve ever had (two).

My eye is firmly fixed on a Clarinervium because they’re beautiful but come in under the £30 mark. It may be a while before I can justify splashing out on the dieffenbachia reflector I’m after 👀💸😎

Anyway, just because I don’t own an anthurium doesn’t mean I can’t look up how to look after them.

Edit: I have one now (a clarinervium)! It’s in the picture at the top.

I got another Dieffenbachia too! It got spidermites and died!

I was going to get one of those supermarket ones so the post was more authentic, but I don’t like them.

I’m sorry if you love those. It’s nothing personal.

Where do anthuriums come from?

There are over 1000 different species of anthurium (fantastically also called the flamingo flower), and they’re found growing in the wild in the tropical rainforests of central and south America.

Haha – the article I’m reading says that no anthuriums grow indoor without a clot of care and attention. I’ll be able to update you as to how true this is when I get one. I’m the opposite of a helicopter parent.

Where should I put my anthurium?

From what I can gather, anthuriums want the same conditions as most indoor plants, but they won’t tolerate much less than perfect conditions. So this is as much where not to put your anthurium as where you should put it.

Anthuriums would like to be near a window, and definitely not near a draught, such as a door or a window that’s regularly opened.

Don’t even THINK about putting them near a radiator unless you have high humidity. You will make them mad.

Mine is on my fireplace, a few feet away from an east-facing window. Ideally, it’d like more light, but erm, I don’t have anywhere else for it to go.

You’ve probably already guessed, no? Anthuriums like bright, indirect light. And they like a lot of it. Like, south-facing with a sheer curtain bright. Oh, but not too bright because anthuriums burn easily.

I still want one.

What temperature do anthuriums prefer?

Anthuriums, predictably, like to be kept nice and warm.

Whilst most tropical plants like to be kept at about 65F/18C, some will tolerate much lower. Not anthuriums, no. Once the temperature drops below 55f/12C except your anthurium to er, die. FUSSY.

Oh, but don’t keep it near a heat source, because it’ll die. Christ.

Yes, I am worried for mine over winter.

What level of humidity do anthuriums prefer?

Yep – anthuriums like a bit of high humidity. Preferably 65% and above. If you’re investing in an anthurium, consider investing in a humidifier at the same time and save yourself a bit of heartache.

Check out my resources page for the humidifier I recommend.

How to water your anthurium

This is where my research got a bit…messy. For every person out saying that the soil has to be kept moist, there’s another saying that you can let them dry out a bit.

Due to these conflicts, I’m going to assume anthurium are like alocasia with regards to watering, so they’ll go for a fortnight without water sometimes and require it every day for a week when putting out new growth.

I’ll file anthuriums under ‘must keep an eye on’ . Check it every few days with a moisture meter, just in case.

How to fertilise your anthurium

No special requirements here, so I am surprised. The frequency with which you fertilise you anthurium depends on whether you have a foliage or flowering anthurium.

Foliage anthurium: fertilise every 6 weeks-ish with a diluted fertiliser. I like to use a seaweed fertiliser, but will shortly be switching to rabbit poo. Waste not, want not.

Due to the picky nature of anthurium, I’m going to go ahead and suggest you’re pretty diligent about keeping clean.

A lot of anthuriums have really big leaves that catch a lot of dust, and the cleaner those leaves are, the more light the plant will be able to absorb.

If you use neem oil on a damp rag or paper towel to clean it, this will help the plant to ward off any pests that are hanging around.

Weirdly, anthuriums don’t seem to be that fussy about the potting mix they’re in.

They can live in normal potting mix so long as you let them dry out a bit, but if you mix them up an aroid mix (since, you know, they’re aroids), they’ll be a bit easier to take care of.

Just add some orchid bark and perlite to your regular potting soil. A bit of coir and moss wouldn’t go amiss either.

There seems to be a thing about using soilless mixes, which I assume means using peat moss instead.

I can’t really condone that because of the environmental implications. Whilst it’s hard to find peatless mixes, it seems wasteful to actively seek peat moss out.

What type of pot do anthuriums need?

I personally like to keep aroids in terracotta. It does mean you need to be more vigilant with your watering, but as a genus, they like a bit of air around their roots, and terracotta is great for allowing a bit of air to circulate in the pot.

My clarinervium is currnetly chronically root bound, but I daren’t repot until spring. Fingers crossed she’ll be ok!

Yup. I think possibly all aroids are to some degree. Don’t eat them, and wash your hands after handling them.

How to propagate anthuriums

You can take cuttings (with a node or leaves) and propagate it in water. You can also propagate by root division – take the plant out of its pot, and cut the offshoots away from the parent plant. You can just lop the parent plant in half, but finding offshoots is the safest bet.

Where can I buy Anthuriums?

Here in the UK, we can buy those cheap ones that look like their flowers are plastic. Some garden centres sell Anthurium Clarinervium, but not many – you can find them commonly on Etsy for under £30

In the USA, anthuriums can be…pricey. The cheapest Clarinervium I could find on Etsy was still over ONE HUNDRED DOLLARS.

(You probably could get one shipped from elsewhere, but I personally would prefer to have a plant shipped from as close by as possible unless there’s a pretty strong refund policy).

Apologies for any typos (or at least more than usual) but I’m teaching myself to touch type and it’s…difficult. And yes, I’ve written hundreds of blog posts and a whole-ass book without being able to type properly.

5 thoughts on “Plant profile: how to care for…anthuriums”