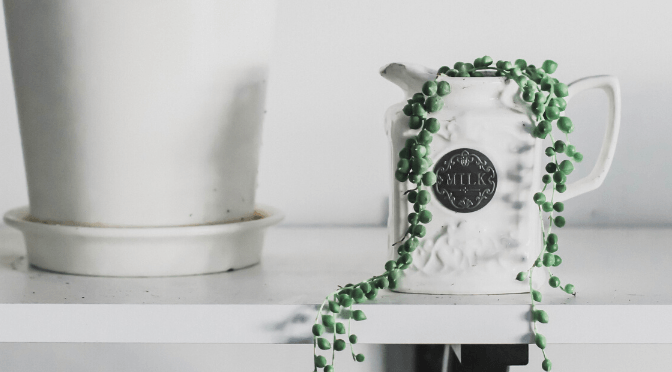 I’d like to start this post by first saying RIP to my string of pearls. It came to me chronically overwatered and covered in aphids, which I could never quite shake.

After a year of hospice care, during which it infected many of my other plants with aphids, I decided he had to be sacrificed for the good of the rest of the family.

You may be thinking ‘why the hell would I take advice from you about SOP care, when you killed one’ BUT I didn’t let it die. I killed it. I kept it alive despite a massive aphid infestation for A YEAR.

Where do String of Pearls come from?

They’re native to southwest Africa – the dry parts, not the tropical parts, which should give you a clue as to a lot of the care tips. No overwatering and calm it with the damn mister.

Stop laughing, this is science.

Other names: String of Beads, but there’s also another plant called String of beads which as more oval leaves.

Where should I put my String of Pearls?

Right by the window. Mine came in a hanging container which I hooked over one of the horizontal window handles.

Mine was in a south-facing window, but east or west will do fine.

***NB*** I live in the UK, so we don’t get very much in the way of bright light. If you live somewhere warm, you might find that your SOH gets scorched in a south or west-facing window, so maybe start out with an east-facing one.

What kind of light do String of Pearls need?

String of pearls grows best in bright light. In low or medium-light they’re likely to grow really slowly, shrivel up, or just…die.

String of hearts are quite similar to cacti in this regard. In the summer months, they can tolerate quite warm temperatures (they’re from Africa after all), but they need a period of cooler temperatures in the winter.

In my experience, SOH aren’t as tolerant of the cold as cacti, so I don’t put mine between the window and the curtain – it goes in my kitchen window which cold but not freezing.

What level of humidity do String of Pearls need?

They’re not big on humidity. My house is naturally pretty humid, which is probably a contributing factor to mine’s demise – it never got the chance to really dry out.

Don’t mist, or put near a humidifier, or indeed a lot of other plants, except cacti and succulents.

How to water String of Pearls

I would definitely consider a moisture metre for your String of pearls. These plants like to be watered thoroughly but then left to totally dry out. If the pearls are shrivelling, check the soil – it may not be lack of water that’s the issue. Check for root rot first.

How to fertilise String of Pearls

String of pearls are particularly susceptible to root burn since they have pretty shallow root systems, so make sure you’re only fertilising every couple of months and only when it’s growing.

Dilute the fertiliser (I use liquid seaweed, or preferably, just water it with my aquarium water) to half the strength the manufacturer recommends.

Make sure the soil is moist when you start – bottom water for an hour or so and then top water with the diluted fertiliser.

Pests common to String of Pearls

Aphids and mealybugs. String of pearls is fairly pest resilient, but once they have them, they’re tough to shake.

I used to sit and painstakingly remove all the aphids with tweezers, spray the plant with neem oil regularly. – I even tried a chemical insecticide. Nothing worked.

The only thing I didn’t do (which I should have) was repot it. If I bought it now, I’d have repotted it immediately, because it was in heavy, soaked soil, but I was young and stupid them.

Oh well. You can learn from my mistakes.

How to propagate String of Pearls

String of pearls are really easy to propagate – just snip a couple of inches of cutting, remove the bottom few pearls and stick the bottom in the soil.

The hardest part is remembering which end is the end to stick in (it’s the one that was attached to the plant).

I’d go for a specific cactus or succulent soil, or add sand or perlite to house plant potting mix.

Add worm castings to your potting mix if either you can’t be bothered to fertilise, or you’re worried about burning the delicate roots.

What type of pot do String of Pearls need?

If you’re repotting, I’d go for terracotta, purely because it allows plants to dry out really quickly. Keep the plant in its nursery pot for as long as you can. Your pearls could do without the stress.

Is String of Pearls toxic?

YES. Which is unfortunate, because don’t they look delicious? Keep away from little nibbly hands and/or paws. Keep an eye out for any fallen beads.

Do String of Pearls flower?

How much do String of Pearls cost?