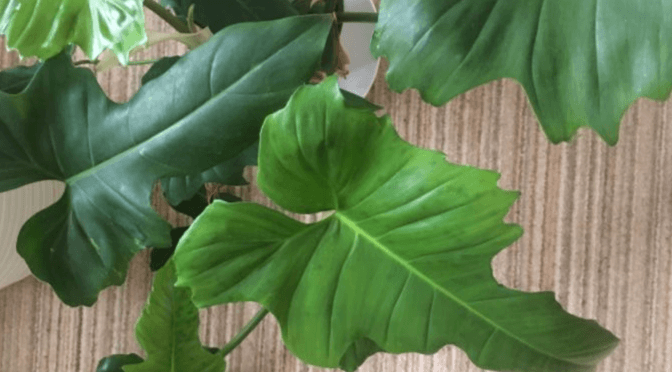 Cards on the table time: not all of my plants have bloomed. I don’t even know which of my plants are likely to bloom.

You see, I’m a foliage girl myself. I got my paws on a Philodendron Golden Dragon at the weekend and I couldn’t be happier. Will he bloom? Who cares? I’ve named him Smaug, his leaves look like dragon’s faces and that’s all I need from him.

Christ, it’s exciting when plants do bloom. My Calathea did, completely out of the blue, and I was thrilled.

Did I do anything special to cause this? Not that I know of. Can I take steps to ensure that I give my indoor plant everything it needs to if it decides to bloom? Yup.

What’s the easiest way to make sure your plant blooms?

If you’re desperate for your plant to flower, pick a plant that will bloom easily. In my experience, my little carnivorous Sundew, some Cacti, Calathea, and Oxalis all bloomed without me doing anything out of the ordinary. But in general, if you give you plants conditions under which it can thrive, it is most likely to produce blooms.

It’s worth bearing in mind though, that some plants simply can’t get everything that they require to bloom in an artificial environment. So short of moving to the rainforest, you’ll have to make do with foliage.

In the rest of this post, I’ll take you through 7 areas that you can look at that will help you encourage your plants to bloom: water, light, fertiliser, temperature, making the blooms last once you have them, buying plants in bloom, and artificial hormones.

Watering requirements vary from plant to plant, so you’ll have to do your research on your individual plant to find out what it likes.

You won’t go far wrong if you obey these general rules:

I leave various buckets outside to capture it. Most plants will appreciate rainwater, some may bloom without it (my cacti did), but some will really sulk if you use tap water (Calathea and Sundew – the Sundew is actually likely to die if you give them tap water because they’re picky little divas). Having said this, at first I gave my Calathea tap water that had been sat out a couple of days to give the chlorine chance to evaporate, and that seemed to be ok.

This is a good tip for a plant carers, regardless of whether or not you’re bothered about blooms. In summer, your plants may appreciate cool (NOT COLD) water, but in winter they’d like room temp or even lukewarm water. Cold water may cause your plant to go into shock and possibly die, hot water may cook your plant.

Make sure your potting mix is holding the correct amount of water.

House plant potting mix on its own holds a LOT of water. If you don’t cut it with perlite or bark you run the risk of root rot.

I mean, my house is probably too cold and draughty for them to bloom anyway, but if I win the lottery and move to a house with a giant heated conservatory I’ll be so ready.

In order to promote blooming, plants would like to have at least two hours of gentle light a day. More would be nice.

By gentle light, I mean indirect light, but east light is good too because it’s that dreamy morning light you get before the sun has really woken up.

Harsh west light is likely to burn your plant ALTHOUGH some plants like cacti are fine on a west-facing windowsill. That’s where mine flowered last year. It didn’t this year though, for reasons it’s keeping to itself. Oh wait, I think the one that flowered may have mealy bugs. Mealybugs are not conducive to flowering.

There are so many articles out there that give loads of examples of ‘low light’ plants, but there are very few plants out there that actively thrive in low light, so any plants you keep in lower light situations are unlikely to bloom.

Bright, indirect light is what most plants crave. Yes, even pothos.

But what is one to do if one doesn’t have enough windows?

I used to have loads of window space but then I became obsessed with house plants and now I have more plants than I do window space.

In winter I think I’m going to have to get some grow lights.

If we’re getting technical, plants don’t need very much green wavelength light – their chlorophyll reflects most of it (is this why plants are green?) – but can be used in photosynthesis and flower development. Grow lights don’t contain green light because unless your plant is in a cupboard, it can get all it needs from the sun.

Red light encourages foliage, but too much (and not enough blue) can make plants grow too tall and block photosynthesis production. Too much blue light and not enough red can cause leaf malformation and for the plant not to grow very much.

UV light damages plants and can’t be used for photosynthesis. There is evidence from Leslie F. Halleck to suggest that small amounts of UV damage can trigger plants to produce antioxidants. If you’re interested in this kind of thing, Leslie has a book on it, called Gardening Under Lights.

Gardening under lights may or may not be on my Amazon wishlist, along with another of her books Plant Parenting.

As a general rule, it’s unlikely that you’ll need to fertilise your plant in the first year that you have it, because the potting medium you bought it in will have enough nutrition to sustain it over the summer, and you shouldn’t fertilise in the winter because doing so can damage your plant.

There are exceptions to this rule though, for example, if you bought a plant bare-roots so that it doesn’t actually come with any potting medium, or if you got a cutting from a friend that was planted in older potting medium.

There are various symptoms that would suggest that your plant is lacking fertiliser, all of which are the same symptoms of other problems like pests, over/underwatering, too little light, etc. Therefore if you’re desperate for blooms but don’t want to over fertilise, you’re best off getting a soil ph test kit from a local garden centre.

Ok, there are three elements that are used in plant fertilisers, and eacg one has a different purpose:

I have a fertiliser 101 article here.

So, don’t we just use a fertiliser with potassium then?

It is a good idea to use a fertiliser with lower nitrogen though unless your plant is having trouble producing healthy leaves.

Don’t neglect phosphorus – if you want your plant to bloom it will require a good, healthy root system in order to do that.

Should I use an organic or chemical fertiliser to make my plant bloom?

There are pros and cons to both:

If you have a specific plant, such as an orchid, you can buy specific fertilisers that can encourage them to bloom.

What you can’t do, unfortunately, is buy an orchid, fertilise it with the specific fertiliser, and expect it to bloom straight away.

The most important part of plant care is the other stuff – getting the watering and light right, and you know, just not neglecting/forgetting about it in general.

I’m currently in the midst of a low level but ongoing panic attack about how my plants will fayre over winter. There is surprisingly little information out there about it.

Some of the little knowledge I could garner surprised me. For example, did you know that cacti aren’t particularly bothered by cold temperatures? It is generally advised to keep your cacti near to a bright window even if they get cold because they need the light and can take the cold.

I mean, it makes sense – deserts get literally freezing at night – but I was prepared to move all my plants into the kitchen so they could huddle together for humidity. As it turns out, the cacti can stay where they are.

It has also been observed by people (I assume scientists) that some plants (orchids specifically, but probs others) may be prompted to bloom after a slight drop in temperature. Interesting, no?

Now, I don’t know why this should be the case with orchids, but there is a family of catfish called Corydoras that go crazy mad breeding in two conditions: the first being when there’s a thunder storm and the second when you change their water and add in cooler water.

The breeding season starts at the beginning of the monsoon season, which is why the change in air pressure during a storm and an influx of cool water can promote breeding behaviour. I guess the same could be true for orchids – they may think that a drop in temperature signals the start of the monsoon season.

Little do they know that it’s about to get cold as fuck.

In all honesty, I had to google this. I’m so excited that my plant thought I was taking care of it well enough to bloom that I don’t do anything to make them last – I just enough them while they last.

But there are things you can do to make the plants last  longer:

If you don’t want to care for a plant after it’s died, then bromeliads are the plants for you. You can buy them from supermarkets in full bloom, and then when the flower is finished, they die and you buy a new one.

The beauty of them (if that’s the kind of thing you like) is that the people that grow them have perfected the art of keeping them in bloom for literally months. We have one at work from Tesco that I believe has been treated with some kind of sap or glue to keep it going. Either way, it’s still going strong.

Personally, that ain’t my thing. I like looking after plants, and the blooms are just the icing on an already delicious cake.

7 – Hormones to make your plant flower

Again, another thing that really isn’t up my street, but for enthusiasts of certain plants using hormones to encourage plants to flower is standard practice.

To anyone new to the hobby, there’s actually a dirty underbelly to the house plant community. If your interest is piqued, watch this video that Kaylee Ellen did on the pink philodendron scandal. It’s creepy stuff! If you don’t really care but want the tl;dr, basically plant sellers have treated some philodendrons with a hormone that gives them pink leaves or variegation. The scandal is that after a year or so the pink fades completely and you’re left with a regular old philodendron (Congo, I believe). So people are paying hundreds (?) of pounds for a year’s worth of pink leaves. Madness.

Peace lilies are often treated with a hormone (gibberic acid) to encourage blooming, which is why you can usually buy them with flowers on, but struggle to get them to bloom again.

They’re treated with the hormone because usually when they’re sold they’re too young to produce the hormone on their own, but they’re more likely to sell if they’re in bloom.

That being said, peace lilies will flower on their own (because they do produce gibberic acid themselves) IF they’re given the correct conditions.

If you want to ensure that your plant blooms:

Then you just have to be patient and do your best.

If it ain’t happening, consider cut or fake flowers.