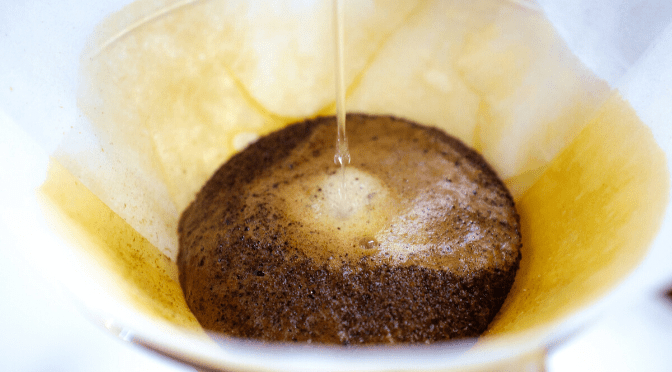 Don’t rush to put coffee grounds on your house plants. From the research I’ve done, the benefits seem to be over-exaggerated – coffee grounds aren’t on a par with fertilisers like worm castings.

That being said, my grandma swore by coffee grounds as a slug deterrent. I don’t have much a slug problem, so I don’t put them directly on the garden, but I do compost them.

I would LOVE for coffee grounds to be a super secret weapon to fertilising house plants.

It would fit in well with my hippy lifestyle. I’m not zero waste, but I’m very big on reducing my impact on the environment as much as I can. You know – reusing margarine tubs instead of Tupperware, being vegan, and wearing the same clothes until they literally fall apart.

Some of t-shirts I sleep in are 15 years old*. As well as being environmentally aware, I hate shopping.

I have digressed. But I like using stuff up instead of throwing it out.

Why do people recommend using coffee grounds on plants?

I imagine the idea originated somewhere where the soil was pretty devoid of nutrition, and coffee grounds added a bit of *something* to it. Plants grew, and so the ‘coffee grounds are a great fertiliser’ rumours began.

Does coffee make a great fertiliser? No.

Does it have no affect on plants whatsoever? Unlikely. It’s a pretty common tip.

I’m thinking that coffee may aid in drainage. it’s pretty gritty. Yeah, it clumps, but so does sand. Maybe that bit of extra drainage helped enough plants grow to give the coffee grounds tip a bit of traction.

This article backs this idea up.

What’s the chemical make up of coffee grounds (specifically NPK)

NPK stands for Nitrogen, Phosphorus, and Potassium – the three nutrients plants need to grow. I have more information about them in this plant fertilising article.

Nitrogen levels in coffee grounds – 2% by volume. Not enough to make any kind of difference, I’m afraid.

There are some articles out there saying that coffee grounds are nitrogen-heavy, so you need to balance phosphorus and potassium. From the figures about we can see that whilst that’s technically true, coffee grounds aren’t an effective fertiliser.

They’re more acidic than alkaline, but we’re talking a pH of 6.8 (7 is neutral). So you can’t make ericaceous soil by adding coffee grounds to normal soil.

Remember when your mum bought you a slushie when you were a kid and you sucked all the flavour out with a straw leaving just ice behind? It’s the same kind of deal.

If you have a lot of spent coffee grounds, and you’re on a bit of a budget, there is evidence to suggest that coffee grounds are great for soil structure.

They apparently act like very fine perlite – loosening the soil and retaining water.

I probs wouldn’t recommend giving up the perlite altogether. I think that if coffee grounds worked as well as perlite, it would be bigger news.

Should I try it? I already produce a lot of coffee grounds. Rumour has it they also reduce disease. Can I also replace the activated charcoal then?

There is a LOT of anecdotal evidence that suggests that coffee grounds benefits house plants. I can’t exactly dismiss all that – if you’ve used coffee grounds and got great results, excellent. Please leave a comment below re. your experiences.

It’s a bit like misting. I know that misting doesn’t increase humidity for more than a couple of minutes.

But thousands of people SWEAR that misting makes their plants grow better. Who am I to say they’re wrong?

Disclaimer: misting won’t save some plants from dry air. Calathea and Fittonia; I’m looking at you.

Either get a humidifier or choose different plants.

Like I said, coffee grounds are fairly inert, so if you’ve already added them to your soil don’t panic. They’re unlikely to do anything that’ll damage your plant.

But if you’re thinking of adding coffee grounds to your house plants, please proceed with caution. Because coffee grounds, like many DIY fertilisers, can attract fungus gnats.

I don’t really mind the odd gnat. As long as numbers don’t get out of hand, they’re more of an annoyance to you than a threat to your plants.

Fungus gnats love old food. To be honest, they’re unlikely to be that fussed about coffee grounds. I only mention it because if you’ve been researching using coffee grounds on your plants, then you may be tempted by other DIY fertiliser recipes.

Don’t do it. Particularly anything involving banana peel. You’ll be fishing gnats out of your Chardonnay all summer long.

So what should you do with coffee grounds?

Compost them, spread them on your flower beds to deter slugs and snails, and…maybe add them to your potting mix to improve the structure?

I have a little compost bin at the bottom of my garden that is home to a few thousand worms. I need to do my research about creating a proper wormery so I can make my own worm castings.

I don’t add compost to my potting mix at the moment because that would attract gnats. Producing my own worm castings would really reduce the cost of my potting mix.

Ok, so I feel like coffee grounds are very misunderstood.

Don’t use them as fertiliser. They’re pretty ineffective unless you’re using a lot.

But rumour has it that they can be used to improve drainage, and reduce diseases in the soil. And you can use them in vermicomposting to produce worm castings.

Depending on how effective they are, they could replace the perlite and activated charcoal in my potting mix AND help me DIY worm castings.

Clearly I’m sceptical. I spend a lot of time on Reddit, and Redditors would be all over information like this. But I’m definitely inspired to keep my coffee grounds separate from the rest of my compost.

I mean, I may as well try to make potting mix with it. I won’t be potting up any expensive plants in it, but you never know. I might take a couple of pothos cuttings, root them in water, and then try them in a coir-bark-coffee grounds mix.

If any one has any information about plants and coffee grounds, please leave a comment with your experiences.

*One I earned by drinking 12 Bacardi & coke, one has a glow in the dark Voldemort on it that scares me every time I get up to pee at night.