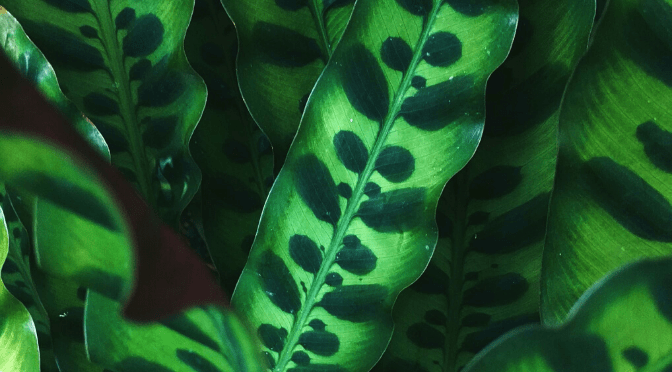 Prayer plants compromise many different species of plant that come from the Marantaceae family, such as Marantas, Calathea, Stromanthe, and Ctenanthe.

The degree to which some plants pray varies, so don’t panic if you don’t see yours moving. If you record a time lapse, your plant might actually be moving more than you think it is.

How do prayer plants pray?

The movement of plant’s leaves in response to light is called nyctinastic movement, and there’s a great article about it here.

In layman’s terms, some plants have something akin to a muscle, called a pulvinus, at the base of every leaf, that swells and shrinks in accordance with the plant’s circadian clock. When the plant senses it’s getting dark, it lifts its leaves.

Why do prayer plants pray?

So now we know how prayer plants pray, but it doesn’t really explain why. Surely if being able to lift your leaves was such an advantage, then all plants would do it.

The current thinking is that prayer plants pray to reduce fungus and bacteria forming on their leaves.

Plants belonging to the Marantaceae family are found naturally in rainforests. During the day, they open their leaves out in order to soak up as much light as possible. Rain does fall on them, but since they need the light, they remain open.

Obviously, at night there’s no benefit to keeping their leaves open. In fact, it can be detrimental. Plants don’t like getting wet leaves (which is why you need to quit misting), since moisture and warmth can lead to fungal and bacterial growth.

It therefore makes sense that they close their leaves at night – any rain that hits them will run off.

Why is my prayer plant not praying?

Your prayer plant may not prayer if:

Prayer plants not praying is a fairly common issue in house plant care, and it’s to do with the light they get.

In the rainforest, Marantaceae will receive dappled light – so they will be exposed to some bright light, though not a lot. But it’s hard to provide dappled light in the house.

Marantaceae do best in bright, indirect light – preferably a few feet away from an east-facing window, so they only get bright light in the morning.

Crucially, though, they can live (and grow quite happily) in medium light. I have a lot of plants, and not a lot of windows, so my Marantaceae are relegated the darker corners, and helped along with a grow light.

If you want your marantas to pray, give them more light. If they don’t have enough light, they won’t bother.

Because plants are picky as hell, if you give your prayer plant too much light, it also might stop praying. You also risk bleaching the leaves. If your plant is in south or west facing window, then either move it further from the window or put up a sheer curtain.

I’ve also heard of people with prayer plants that only prayer when they’re really thirsty. I would avoid letting marantas get too dry (and definitely Caltahea, who will die just to spite you)

Where should I put my prayer plant?

It depends. As I said, a few feet away from an east-facing window is perfect, but they can happily tolerate medium light conditions. You just won’t get as much praying.

How to care for a prayer plant

I have an indepth post on Calathea care here.

I’ve found Marantas, Stromanthe, and Ctenanthe to be easier to care for than Calathea. They all require broadly the same care, but Calathea complain more if everything isn’t exaclty to their liking.

We’re already discussed this. Bright, indirect east light is best, but medium light is absolutely fine too. That’s what mine get.

Humidity is very important for growing Marantaceae. I would strongly recommend getting a humidifier if the humidity in your hime is below 65%. Misting will not cut it, and can increase the chances of fungal and bacterial infections.

Prayer plants like to be kept moist, so they’re not a plant for under waterers. They also don’t like to be soggy, so bear that in mind too.

They won’t tolerate tap water – you’ll end up with brown spots and crispy leaves. Rainwater, filtered water or distilled water are fine. Make sure the water is room temperature so you don’t cause the plant to go into shock.

Mine do very well in my homemade soil mix, because it’s very well draining due to the perlite and bark, but the coir retains enough water to stop it drying out super quickly.

I wouldn’t recommend terracotta pots for maranta since the water can leach out of the clay very quickly. When you’re having to use fancy water, you don’t want to waste it.

What are the easiest prayer plants to care for?

In general, bigger plants are easier to care for than little ones. Also, how easy a plant is to grow depends lot on the conditions in your house.

For example, my Calathea orbifolia has grown really well and never gives me any issues, whereas other people really struggle. My Calathea Roseopicta, on the other hand, hates me. They’re apparently a super easy Calathea, but then again, I struggle with spider plants.

I got a Ctenanthe lubbersiana for £14 from Sainsbury’s, it never gives me and ounce of trouble. The odd crispy tip, sure (they’re practically unavoidable) but it puts out so much new growth.

Marantas are pretty easy to care for, and you can propagate them from stem cuttings, which is pretty rare for Marantaceae, I believe.

If your prayer plant stops praying, it may not be because it’s unhappy, so don’t panic. It is worth checking it over to make sure it’s not too wet or dry, that it’s getting enough light, but not too much, and that you have high enough humidity.

Whenever I notice a change in any of my plants, I check for pests, then for soil…moistness (ew what a word), then for any signs of legginess or leaf bleaching to rule out light as being the cause of the issue.

Hope this was helpful! Good luck with caring for your prayer plants – they’re really beautiful, and not that finicky, I promise.