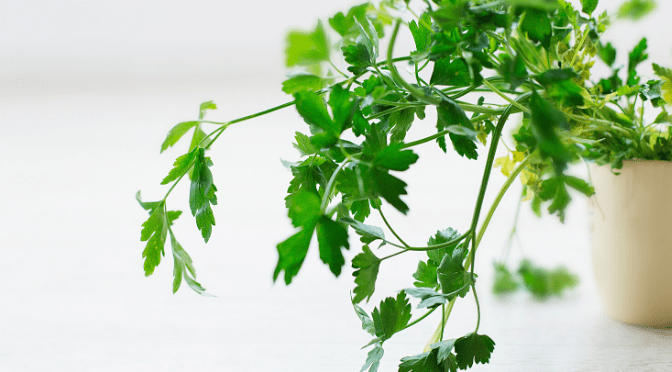 Growing herbs indoors is one of those things that everyone’s either already doing or want to do.

We have aspirations to be some kind of nature goddess that can pluck a few sprigs of thyme from the windowsill to add to the top of the vegan cottage pie we just made from scratch.

Supermarkets have made it super easy to have fresh herbs available. For a mere pound you can have a healthy bunch of basil that’ll last you a good fortnight before dying dramatically and totally.

I write this post as a fellow herb killer. I’ve tried to grow them many different ways many times over the years, yet alas, my kitchen is currently herbless.

I do have a system in place for summer that gives me A LOT of herbs in exchange for a fiver, some potting compost, some pots and an hour, which I’ll get to at the end.

Let’s set ourselves up for success, yes?

Some (most) herbs just don’t do well indoors. Plants don’t naturally grow outdoors, did you know?

Unlike house plants, a lot of the herbs we have available either grow readily in our climate (I’m in the UK so it’s cool and damp, but not super duper cold) or have been cultivated in such a way that they’re pretty hardy, adn will grow in our climate.

But climate is outside. The climate inside is more akin to, depending on your humidity levels, the tropics. Perhaps not always, but usually in summer, it’s…pretty warm.

A note on air con: we don’t have it in the UK. It’s not really a thing, apart from in shops. I know precisely no one with an air conditioning unit in their home.

The point of that weird segue in air conditioners will become apparent later on.

So, what herbs grow well inside?

If you google ‘which herbs grow well indoors’ you’ll get a list similar to the one above, which is fine. They’re herbs. But I’ve absolutely had wildly different results from growing each of these, and my knowledge of house plants has made me understand why that might be.

Herbs aren’t like houseplants, in that they grow until you kill them. Some, like basil and coriander are annuals. Once they die/are picked they’re done. If you want more, you’ll have to plant/buy more.

Mint, rosemary and parsley are perennial, si if annuals are too much of a ballache for you, stick with those.

They grow outside, usually in the Mediterranean or, you know, somewhere in Europe.

This is one of the reasons they don’t grow as well indoors as house plants do.

Most house plants come from the rainforest and are used to bright, indirect light. That’s what they’re designed for.

And herbs love a bit of bright, indirect light.

Except not a bit, a lot. They don’t live on the floor of the rainforest. They grow in gardens, or on exposed scrubland, baking under the Mediterranean sun.

Think of those French lavender fields – acre after acre of lavender exposed to blistering heat. It’s not *quite* the same as your windowsill in Bracknell.

So yeah, your herbs need to be in the windowsill, with your cacti.

Do you see why your herbs are dying? They’re not the happy-go-lucky plants that TV chefs led us to believe.

I’m beginning to think that those herb-arrangements that are ever-present on Saturday kitchen are *gasp* a prop, and created anew every week.

(I don’t mean they’re fake, btw, just that it’s not the same one week on week, which I suppose is obvious now I come to think about it).

This is where the air-con may help.

Some herbs like a bit of humidity – like basil, whereas sage will get root rot at the first sniff of warmth and damp.

They’re used to living outside, in exposed-ish places where they’ll get a bit battered by the wind. In some cases, they need the wind to be able to reproduce and pollinate properly.

And this means be careful when you buy herb plants, especially the super bushy ones you get from supermarkets because they’ll be hard to see.

This is what I do to ensure a plentiful supply of herbs.

I buy a pot each of basil, parsley and coriander, and repot each pot into three separate pots.

You see, in order to maximise the longevity and fullness of their herbs, supermarkets cram dozens of seedlings into one pot. Which means that by the time it gets to you, it’ll probably be very rootbound.

After leaving the plant to acclimatise for a couple of days, I split each root ball into three and pot them up into three pots – the one the plant came in, plus two others the same size. Just a add a bit of compost and let them sit.

The plants do grow, but the growth is rather leggy. They stay alive for much, much longer though, as long as you after them.

The best conditions in which to grow herbs

I keep my plants outdoors, which I know isn’t an option for a lot of you. A balcony will do though, or even next to an open window.

I keep my pots in a plastics tray (check out my resources page for the ones I recommend) and keep the tray topped up with water.

I think it’s a combination of their nature and that they’re outside, but herns are suuuuuper thirsty.

And if you let them dry out, they collapse so so overdramatically.

If this wasn’t helpful, I hope that at least it helped you to understand why all your little indoor crops kept failing.

Even if you manage to keep your pots alive, unless you live in a fairly hot country, your herbs (especially basil, I’ve noticed) doesn’t have quite the same pungency as herbs you buy from the shop.

I think because it’s fairly easy to grow herbs in the garden, people incorrectly think it’s easy to grow them indoors, when it isn’t always.

I didn’t intend this article to put you off growing herbs indoors. In fact, your knowledge of house plants will probably help in identifying issues such as pests and thirst.

Just know that it ain’t as easy as people make it out to be.

And there’s no shame in buying them from Tesco.