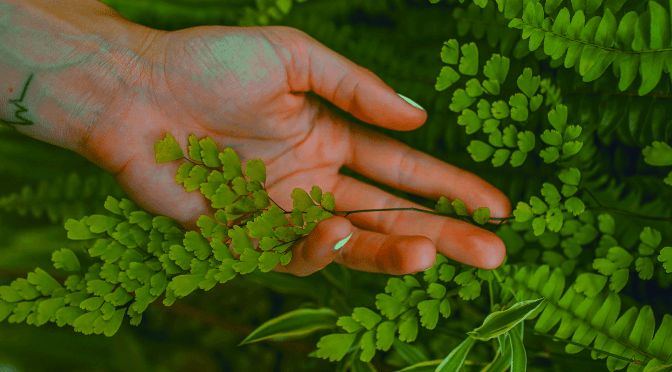 Everyone loves maidenhair fern. They were the It Plant a couple of years ago – I remember because I fell in love with one, brought it home and killed it within a fortnight.

I was understandably put off by this so didn’t get one until late last year. I’m happy to say that it’s doing ok.

It’s not grown much (from what I can tell – I really need to take a picture of plants when I buy them so I can tell how much they’ve grown), but it’s still alive.

It doesn’t even require that much care. They just seem to go downhill quickly if you abandon them for too long.

Where do maidenhair ferns come from?

Maidenhair ferns grow in the wild in the woods of the Pacific Northwest and much of eastern North America, as well as Japan.

They typically grow in the gaps between rocks, where water seeps through and keeps them wet.

Interestingly, they’re known as a hardy fern, rather than a tropical fern, so you’d think they were a cinch to take care of. But no, inside our houses is not quite the same as the moist woods in which they naturally grow, which is why they have a tendency to die if ignored.

The maidenhair fern commonly sold to house plant enthusiasts is the Adiantum peruvianum (or Peruvian Maidenhair fern). I’m going to boldly assume it comes from Peru – not exactly a leap, is it?

So I’m confident that maidenhair ferns are pretty widespread throughout the Americas.

Where should I put my maidenhair fern?

There are over 200 varieties of fern that are under the ‘maidenhair’ classification. A couple of these will even grow in your garden, but I’m discussing the ones commonly found in garden centres being sold as house plants.

I keep mine on the open shelving in my kitchen, about three feet away from a south-facing window that is both textured and protected from the sun by the house next door.

In the summer, mine will be moving to my bathroom window, which is facing the same way as the kitchen window, but with a bit more filtered light and more humidity.

Maidenhair ferns can tolerate some bright, indirect light, but they scorch easily.

Ferns, in general, receive dappled light in the wild, so try to replicate that as much as you can.

If your fern isn’t growing well or is getting yellowing fronds, it could be a sign that it isn’t getting enough light, so you may need to experiment to get the light just right.

As I mentioned before, these plants can be temperature hardy, but the Peruvian one (which is the one we probably all have) really doesn’t like to go below 16 degrees C (about 60F).

As you can probably guess, maidenhair ferns love a bit of humidity. If you don’t have a humidifier, then I’d put it in the shower/bathroom.

I could go on about misting and pebble trays, but I personally believe this to be more hassle than it’s worth.

If you want to have humidity-loving plants and you live in a house with dry air, you’re best off investing in a humidifier. Or fill your bathroom to the rafters.

How to water your maidenhair fern

Ok, there are a lot of opinions online about this, but from what I can gather, if your tap water isn’t too hard, you can use it to water your maidenhair fern.

Normal watering rules apply: use room temperature water and make sure all of the soil is watered thoroughly.

Don’t allow your maidenhair fern to dry out. If you’re an overwaterer, this is a plant for you, maybe not so much if you’re an underwaterer (though I’m one of the latter and mine’s still alive).

As always, don’t let your fern sit in water. Just because it likes its soil to be kept moist doesn’t mean it wants to sit in a bog. These plants can still develop root rot and fungal problems like all the others. It ain’t special.

How to fertilise your maidenhair fern

No special requirements here – fertilise every month or so with a fertiliser diluted to a solution half as strong as the manufacturer specifies.

Did that make sense?

I just add a tiny drop of seaweed emulsion to my watering can, but I know many people like exact numbers.

Watch out for aphids, mealybugs, and scale.

You can’t really wash the leaves of maidenhair fern with neem oil very well because it can weigh own the delicate leaves, so you’re best off spraying the plant down with a mix of water and insecticidal soap.

A lot of people sear by the Dr. Bronners soap, so I shall have to get some. They quite often have it in TK Maxx.

Again, nothing special. Just use a regular potting mix with some perlite mixed in. Just because ferns like their soil to be kept moist doesn’t mean they don’t need a well-draining potting mix.

No one likes having wet feet.

What type of pot is best for maidenhair fern?

This really up to you, and you’re watering habits.

If you’re a chronic over-waterer, then, by all means, put your maidenhair fern in a terracotta pot.

Just be aware that terracotta will dry the soil out pretty quickly, so you’ll need to check on your fern regularly – maybe up to every other day in summer.

Note that I said to check your plant every other day, not to just blindly water it every other day. A moisture probe is your friend here – the one I use is on my resources page.

I’d probably recommend plastic or ceramic pots (with a drainage hole, if you can find such a unicorn) if you’re not a chronic over-waterer.

If you let your maidenhair fern dry out, you don’t get a very long window in which to water it.

Nope, but their delicate fronds could potentially pose a choking habit.

Maidenhair ferns are actually herbal remedies used to treat conditions like asthma and to strengthen hair. Does it work? No idea.

A lot of pets do like to nibble ferns, but it’s annoying rather than life-threatening.

How to propagate maidenhair ferns

Ferns propagate in the wild by releasing spores (those little brown spots you get under the leaves), but you can propagate yours by division if you wish.

Please feel free to add any care tips in the comments below.

2 thoughts on “Plant Profile: how to care for…Maidenhair fern”