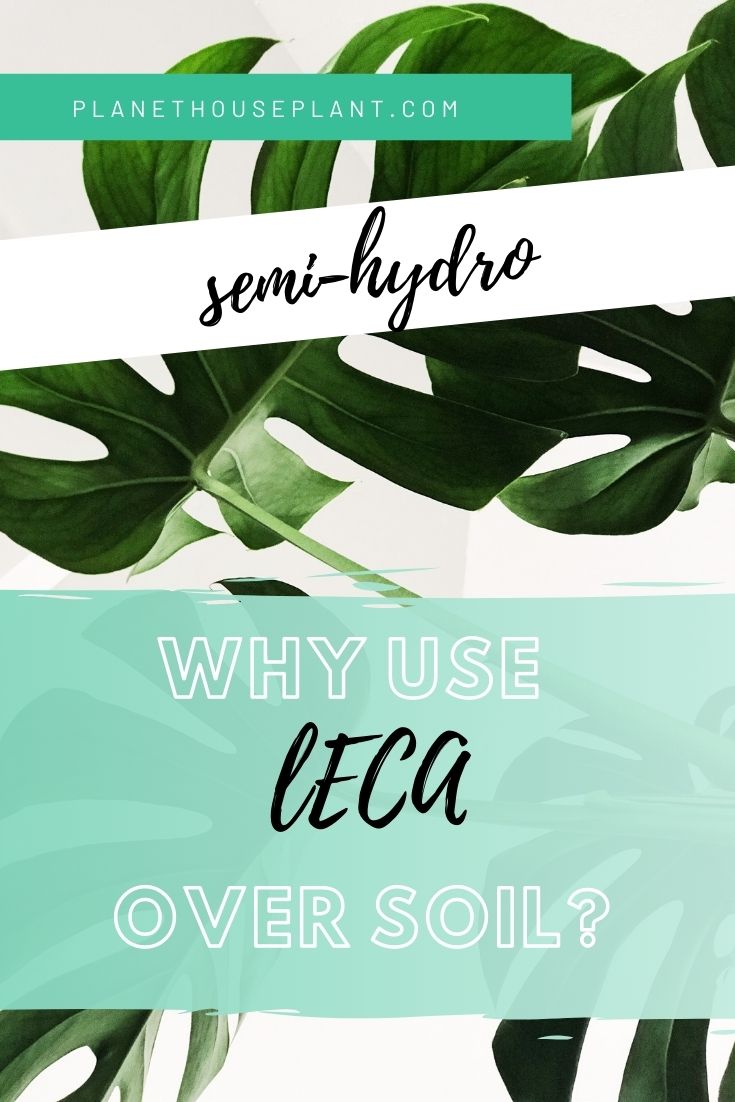 Growing plants in semi-hydro/Leca isn’t better than soil – it’s just different. So if you’re perfectly happy growing your house plants in normal potting mx, then by all means carry on.

Some of the benefits of using Leca, such as the ability to better control the pH of your plant’s growing medium, are things most of us simply don’t care about.

Buuut if for some reason you’re curious about semi-hydro (perhaps you’ve seen it on YouTube – that’s how I got started), there are definite upsides to using Leca.

Oh, and if you have no idea what leca is and why I’m wanging on about it, I have an introductory post here, though in all honesty both posts have been scheduled but not published so the link to the other post being there hinges on me remembering to link it.

(UPDATE – I did it! And only three days after I was supposed to!)

Whilst extracting clay from the earth is apparently sustainable (for now, anyway) I have my doubts. Maybe one day someone’ll invent a potting medium made from recycled plastic.

Anyway, if we’re comparing potting mix with Leca, there is one aspect on which Leca will always win out: it’s reusable. And it’s pretty durable. Even without considering the environmental impact of peat moss, the fact that you can reuse leca makes it a more ecologically sound medium than soil.

Unlike potting mix, which breaks down over time, leca can be reused over and over again. You can reuse potting mix, but you should really bake it in the oven to ensure all the nasty beasties are dead, but Leca just needs to be rinsed through thoroughly with boiling water.

When we water plants, we’re encouraged to water plants until water comes out of the drainage hole. I do do this, but it doesn’t sit well with me, so I collect water, and recycle aquarium water to water my plants.

But semi-hydro is more of closed system The water lives in a reservoir at the bottom of the cachepot, and is wicked up by the Leca to the roots. And then you just top it up as it evaporates.

Whilst it is recommended that you change the water and flush your plants every now and again, it’s less wasteful than using soil.

Semi-hydro is easier to schedule

If you try to put plants on a schedule, you invariably end up overwatering them. Rather than just setting up a weekly appointment, plants demand that you check them every damn day (I don’t, but I know that’s what they want).

This is helpful if, like me, you somehow mysteriously ended up with a load of plants and you’re not quite sure how. It can be easier spending an hour topping up water reservoirs once a week rather than having to cast an eye over everyone every day.

Whilst this is something that appeals to me, it isn’t make or break. I can technically count plant care as work (and therefore sack off proper work on a Friday afternoon to do it) so i don’t really mind.

It’s also why I try to not to let pest infestation bug (lololololol) me too much – it’s a learning curve that I can then pass onto you. I’ll make the mistakes so you don’t have to, and in return, I get Friday afternoons off.

Leca is less messy than soil

If getting soil all over your carpet is the bane of your life, leca is an option. It’s far easier to spill (it is, as the name suggests, lightweight) than soil but also far, far, easier to pick up.

Fungus gnats are attracted to rotten matter in your soil mix.

Leca not only doesn’t have that, but it also does have a water reservoir – not only can fungus gnats not breed, but should any fungus gnat be tempted, it could drown in the reservoir.

This happens far more often than it should. How fungus gnats haven’t gone extinct is pretty impressive.

Leca is often lauded as being pest-proof. It isn’t true. Spider mites don’t need soil at all, and any nonsense about them not liking moisture and therefore leca are, I’m afraid, untrue. Spider mites like the dry and the warm, but they’ll settle for damp and cold if that’s all you’re offering.

Thrips go into the soil for a stage of their lifecycle, but they seem to manage in leca ok.

But I do find all pests easier to manage in leca, because it’s so easy to the plant out of the cache pot (or even out of the leca) and blast it off with the shower head. This is a pretty effective way of getting rid of pests.

Whilst you certainly can blast plats in soil with water, you run the risk of overwatering the plant, plus soil gets EVERYWHERE.

Fertilisers for soil are readily available from a variety of places, and there isn’t really a clear winner when it comes to picking a good one – you just buy one and hope. It’s up to you whether you pick a 5-5-5, 10-10-10 or 3-2-1 or whatever. It’s all a bit overwhelming.

But with semi-hydro, there are fewer choices and they all do pretty much the same thing – you just adjust the amount depending on how big your plant is, or what time of year or whatever.

Yes, it’s a ballache measuring it out, but there’s a lot of information out there (YouTube is good), and it all says pretty much the same thing.

The whole thing also seems pleasingly sciencey-y. I have many syringes and pipettes. I might even get myself a white lab coat. It’s like Breaking Bad for those of us that like jigsaws and crochet.

You can more accurately control pH

Some people LOVE this about semi-hydro. It means that you can increase the chances that the plant is absorbing all the nutrients it needs.

I…don’t really care. Yet. I do have a tendency to obsess about things I’ve previously not cared about.

You can keep plants in smaller pots

Obviously there’s a point at which the rootball will be bigger than the plant, but if you don’t want the plant to get any bigger, it’s pretty easy to trim the roots – I mean, they’re right there.

It can be cheaper than soil

A bag of leca is cheaper than a bag of soil and quality isn’t much of an issue. Whilst a lot of people have preferences when it comes to leca (big pebbles, small pebbles, round pebbles, uneven pebbles), from what I’ve seen, it doesn’t make a massive difference to the actual plant.

I get this leca, but I’ve also tried a weird, grey one that someone of the reviews said doesn’t wick up the water, but it worked fine for me.

But switching to semi-hydro isn’t cheap. It’s pretty cheap to maintain, in that you can reuse the leca, and the nutrients and things seem to last for ages, but getting all the initial stuff can be pricy.

I have heard of people not using any nutrients at all and having great success, and many people use aquarium water, so you can always start off using what you have and just getting additional nutrients as and when (or if) you need them