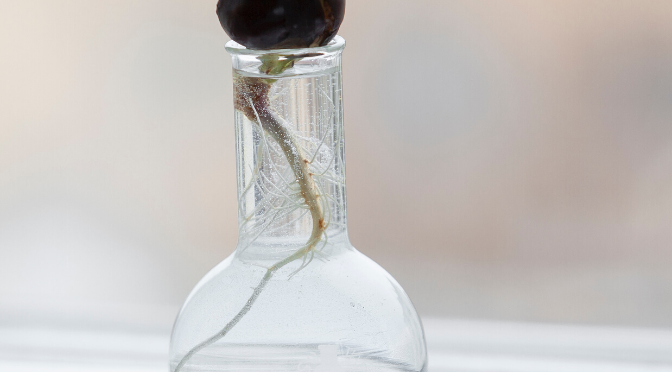 This is an area that I think is VASTLY impacted by outside influences.

The temperature and humidity of your house, the country you live in, and the quality of the parent plant will all have an effect on how easy a plant is to propagate.

it’s also worth remembering that I don’t think there’s a plant parent on the planet that has a 100% propagating success rate. Surely not?

Time is also a factor. Don’t give up too soon on your propagation projects. Some plants just take their sweet time when it comes to putting out roots.

So anyway, in no particular order, we have the ten plants that are easiest to propagate:

(In a fairly humid house in the UK)

These bad boys take time. They also tend to look a bit worse for wear after a while, but keep going.

To propagate Sansevieria, cut off a leaf, then cut a triangle out of the bottom of the leaf so that it has two prongs. Put the leaf in water and wait. For freaking months.

I have no idea why giving the leaf a couple of prongs works (possibly something to do with increasing the surface area of the base of the leaf), but it works. I’ve done it. Twice.

Weirdly, I’m not the greatest spider plant parent. I often have to put them back into water to get the roots going again. I think I’m potting in pots that are too big.

As you probably know, spider plants put out pups. Simply cut the pup away from the mother plant and put the bottom in water.

The roots on spider plants grow incredibly fast, but I would highly recommend leaving them in water until they have a really strong root system.

Make sure to keep them moist for a couple of weeks when you do finally transfer them into soil.

I am historically terrible with spider plants BUT I’m growing some babies in sphagnum moss pretty (I hope) successfully.

See spider plants, except spider plants very kindly send their pups out on a shoot, whereas you’ll have carefully uproot the baby pilea, and try not to damage the roots too much (although you’ll have to snip a few to remove the baby).

If I’m honest, I wasn’t aware of the whole ‘being careful when removing the Pilea pup’ thing, and I just yanked it out with my brute strength.

Both the mother and baby are fine, so if you’re a clumsy oaf like me, gently pulling out the baby worked fine for me. Don’t tell the plant police.

This is just a case of snipping off a bit of pothos with a leaf node (the bumpy bit that sometimes has aerial roots coming out of it) and putting it in water.

Pothos are always heralded as being so easy to propagate – just cut them back and put the cuttings back in the soil – but it doesn’t work for me.

I don’t realise that the plants haven’t produced any roots until it’s too late, because pothos leaves take months to shrivel up and die.

So yeah, I always propagate pothos cuttings in water, just to be sure they are producing roots.

Tbh I’ve not tried to propagate Adansonii, but the internet assures me it’s super simple. I’m going to try when it gets a bit warmer, so if I can’t do it, I’ll update this page. If you’re reading this in Autumn 2020 and it still says Adansonii are easy to propagate, they are.

However, I have propagated Monstera Deliciosa, and they LOVE IT. I’ve never water propagated them (though I will in future), but I have just chopped up my Monstera like an animal and potted each cutting up in soil. And I’ve never lost one.

Seriously, if you want a statement, Instagrammable plant that requires very little of you, pick Monstera Deliciosa over fucking Fiddle leaf figs every time.

If you still want a FLF, I have a care guide here.

But yeah, Monsteras are fairly foolproof in the propagation stakes.

A plant that is quick to die is probably more of a pain in the arse to propagate. Philodendron micans are easy peasy to propagate, and they’re beautiful.

They look cool as hell, they’re easy peasy to take care of, and they’re a bit different to what everyone else has.

Propagation is the same as for most vining plants – take a cutting with a node and stick it in water. Done. I propagated a Peperomia Piccolo Banda in water and it’s doing well. Small, but healthy enough.

It has pups. Actually, a lot of succulents do, and you can just gently cut them away and pot them in soil.

I tend to leave my succulent families together because they look really cool, but I had to separate a few last year because they were busting out of their pots.

I had mixed success, even though they were all in the same potting mix, on the same windowsill, in the same size pots. And they all got the same amount of water.

Sometimes it’s a plant thing, not a you thing.

My aloe has gone to lie outside. It’s just too big and pointy for my very small house.

Snip chain, put chain back in soil. I’ve had new growth in DAYS.

I have a bad habit of trying to untangle my chain of hearts because I don’t want to to look messy or get tangled on a way that impedes its growth.

This means I get A LOT of breakages. It’s fine, because they propagate so so easily.

I have had no luck whatsoever with string of pearls, bizarrely enough.

These get leggy once they reach a certain (not very long) length, so I chop them back and stick them in soil. I don’t have the 100% success rate that I do with chain on hearts, but I’d say it’s at about 75%. Not bad.

Rhaphidophora tetrasperma – I took a cutting in what, September? No roots. If it’s dead, the leaf is looking very well on it.

This is the only plant in the ‘why the hell won’t you root for me’ category, but it perplexes me. It’s called a mini monstera for Christ’s sake. I’ve tried it in soil and water and nothing. If it grows roots before the leaf drops off I will hail it as the miracle plant.

Although if they do just happen to take a good six months to root it would explain why the damn things are so expensive. I got mine cheap because it’s the least bushy one ever – it’s literally just one long vine.

I’m going to cut it back and try again in the spring because it’s crawling around the open shelving in my kitchen and tying all my plants together.

Every time I get a plant down to be watered, I have to untangle it from the Rhapidophora.

Anyway, I hope this gave you a few ideas for propagating in the spring. I’d highly recommend starting with something easy, such as chain of hearts, to get you off to a positive start.

4 thoughts on “What are the easiest plants to propagate?”