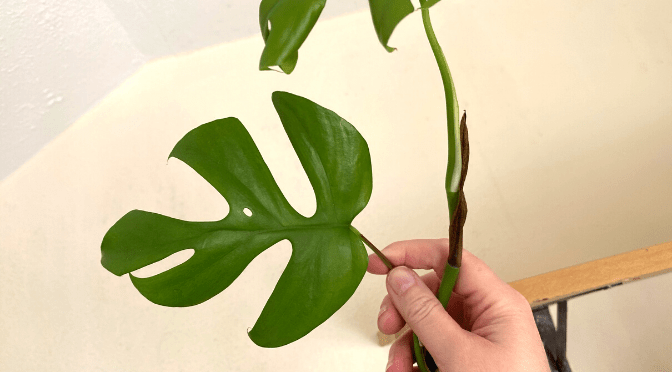 I don’t like the ‘mini monstera’ nickname, but it’s a common name and (crucially) it’s easier to type than Rhapidophora tetrasperma. I’ve never used copy and paste so much in a single article.

A bit of back story: I bought my Rhapidophora tetrasperma last year, and it was very cheap. Like, a tenner. It was also in AWFUL shape, hence the price drop.

The leaves were damaged and it looked a bit like pest damage, probably the reason it was such a bargain. It didn’t have pests. In my experience, Rhapidophora tetrasperma are pretty delicate – it’s easy to damage the leaves by accident.

It was also one long vine, and I wanted a bushier plant, so I took cuttings. THe one last year just rotted, but I sucessfully rooted three cuttings this years

How to propagate Rhapidophora tetrasperma:

The plant itself is not delicate or particularly hard to care for.

It’s recommended that you keep the soil moist, but mine’s accidentally dried out a few times and it’s fine.

Rhapidophora tetrasperma is not a low-light plant. They get floppy and sad very quickly. Bright, indirect light is ideal, but medium light is also tolerated.

Although higher humidity would be appreciated, mine is in a room with 45%ish humidity and it’s growing nicely.

I’ve not fertilised mine yet since it’s recently had a soil change. I’m sure a regular seaweed fertiliser would do perfectly well.

Due to it’s vining nature, you’d assume that Rhapidophora tetrasperma are easy to propagate.

To be fair, they might be for some people. It wasn’t until I saw a few people on Reddit struggling to get roots that I realised that my experience of propagating Rhapidophora tetrasperma might not have been a one-off.

Can you propagate Rhapidophora tetrasperma in water?

Ok, you probably can. But it didn’t work for me.

You see, it takes Rhapidophora tetrasperma a long time to root. Often it takes so long for the roots to form that you end up with stem rot. Or the leaf will die. It’s not unusual for the leaf to die, but it happens much quicker if you root in water.

Can you propagate Rhapidophora tetrasperma in soil?

Again, probably, but I really wouldn’t recommend it.

When I tried to propagate in water, the battle wasn’t the actual rooting process, it was keeping the rot at bay because rooting took so long. I have tried rooting a cutting in soil but it just rotted and the leaf died really quickly.

It’s not something I’d try again, purely because it withered away so quickly.

How to take a cutting

Rhapidophora tetrasperma don’t root from leaf cuttings (as far as I’m aware) so you’ll need a bit of stem.

Here’s a photo of my plant with dotted lines to indicate where I’d take a cutting:

I like to cut an inch or so below the node so that if rot occurs I can snip it away without damaging the node.

Rhapidophora tetrasperma nodes are easy to see – they usually grow one leaf and an aerial root per node.

They’ll only deviate from this pattern if you take a cutting, so if you want a bushy plant, you’ll probably need to take cuttings.

How I finally got my Rhapidophora tetrasperma to grow roots

In short, I put it in moss.

Now, I don’t like using moss, because it’s bad for the environment. I’m pretty sure it’ll work in damp perlite too, but I haven’t tried it (yet – I’ll update when I do).

The only reason I tried it was that I had a bag of moss in the shed that I didn’t want to waste. I’m interested to see how long I can get away with reusing it.

I’ve seen people online saying that perlite is also bad for the environment, but I can’t find much to back that up. Only a tiny fraction (less than 1%) of the world’s perlite is being mined, and it’s reusable.

If anyone has any information that disputes that, please leave a comment. The link does go to a perlite producer and they’ll be pretty biased, I imagine.

But anyway, potting it in a damp medium that allowed a lot of airflow and light caused my rhapidophora to root pretty quickly.

Yes, the root is covered in moss, but it’s there! I toyed with the idea of picking all the moss off, but you know what a root looks like. If the roots are as delicate at the new leaves I’d have probably killed it.

As you can see, the root has grown out of the aerial root.

We also have what looks to be new growth, which is extremely exciting.

My mother plant grows like a weed, so I’m hoping that once the roots are established, the plantlets should start to grow pretty quickly. fingers crossed!

How long does it take for Rhapidophora tetrasperma to grow roots?

My cuttings had been in water for about two weeks before I transferred it over, so we’re looking at about a month/six weeks from cutting to potting up.

Propagations always take longer than you’d think. I took Sansevieria cuttings last year that took MONTHS to root, and still haven’t produced anything other than roots.

Be patient. I’m going to take another cutting at some point that I’m going to start in moss and see if it’s quicker. I just need to wait until I get a bit more growth on the mother plant.

This growth happened about a week after I switched from water to moss. Interestingly, this cutting didn’t produce roots from the aerial root.

I can only assume that the cutting that produced roots from the aerial root was younger growth. Or maybe it’s just a matter of chance. Anyone know?

You can also see from the picture that the leaves are looking pretty sad. I’m afraid they’re basically sacrifices to the cause, and will probably die completely in a month or so.

How I potted up my Rhapidophora tetrasperma

I’ve potted my three rooted cuttings in one pot, and eventually I want them to be in the same pot as their mother.

To be perfectly honest, the roots weren’t as big as I’d have liked – maybe an inch long, but only just.

I have no excuse – I’m just impatient. If you want to see updates, follow my Instagram. I’ve not done much propagation yet this year, but my Golden dragon babies are doing super well.

If anyone has plants that they’d like me to try to propagate, let me know. I’m game.

I used these ones from Amazon because they’re my fave. They come in a pack of ten, they have drainage holes, they come with a saucer, they’re pretty, and they’re cheap.

I used my regular homemade potting mix. I make it in bulk because it’s easier. If there’s a way to break up coir blocks, please let me know.

The potting mix is

My mother plant is in the same mix and seems to like it. It’s pretty much the mix I use for all my plants, and no one’s complained.

Different plants require slightly different conditions in order to root, but here are a few factors that can influence rhaphidophora tetrasperma propagation:

I don’t know if it’s just a coincidence, but the cutting I took with two leaves struggled to root, and it’s the only difference I could find between the cuttings.

I’m pretty sure that the leaves are on borrowed time. That’s ok – the roots are growing, so new leaves should start forming soon.

As I explained in this article, aerial roots are unlikely to change into ‘proper’ roots. But in the case of rhaphidophora tetrasperma (and probably a lot of other plants) the aerial roots can start to produce roots, so don’t cut the aerial root off the cutting.

Good luck with your propagating!

Someone asked what happens to the mother plant after you take a cutting – in my experience the plant will keep on growing from the node nearest to where you took the cutting. It doesn’t take very long for the mother plant to get going again, and you don’t need to do anything other than your regular care routine to encourage new growth.

Here’s a photo of new growth (taken in a dark kitchen at 10pm, so apologies for the quality):

the node already has a leaf and an aerial root coming from that node, but it doesn’t seem bothered.

17 thoughts on “How to propagate Rhapidophora Tetrasperma (mini monstera)”