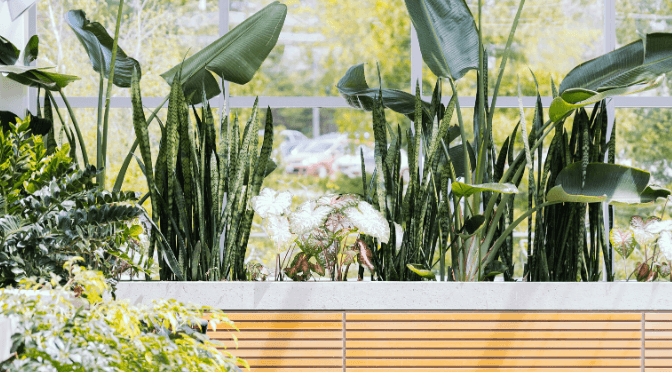 I encourage you to read to the end of this post because it starts of drolling talking about how plants surely don’t give a shit about what we have to say and ends up with me dreaming about shouting in a field.

A wild ride, you’ll have to agree.

Do you speak to your plants?

I personally don’t, one because I’m too busy talking to my rabbit, and two because I live in a semi-detached house and two, because my neighbours already have to listen to me yack on Instagram stories.

People have been wanging on about the benefits of talking to your plants for decades. It’s always a bit tongue-in-cheek though, unsurprisingly, because plants don’t have ears to hear with, nor brains with which to process your words.

Or at least I don’t think they do.

What the science says

I’m afraid there’s no conclusive research out there that proves that plants benefit from a few kind words.

Although, on the other hand, there’s no evidence that talking to your plants is harmful, so you know, go for it.

Scientists credit Gustav Fechner with first suggesting that plants like to be talked to, so I looked him up on Wikipedia. Sadly, they didn’t allude to his plant conversations, probably because it seems like he was a pretty influential dude.

No one wants to admit that some scientist that had a massive influence on psychophysics and philosophy thought that you could make plants grow faster by talking to them.

Before we throw out the theory that plants like to be talked to, I think it’s important to note that there’s not been a lot done in the way of research.

I mean, research costs money and who would pay for it? There’s no Big Plant money out there. YET.

Plants do react to sound – a 2007 South Korean study found that sound turned on a couple of genes. But talking wasn’t loud enough to do this – so if gene-turning-on is your jam, you’ll either have to play your plants some music or really yell at them.

Hah, I’m at 300+ words already and this post was just meant to be a bit of fun for me to research. I’m in love with the idea that some prominent psychophysicist wrote a book on talking to plants. The 1800s were a magical time.

Ok, now a change of pace.

Unfortunately, they know not why. Oh, and the studies were done on like, 10 plants, That’s not conclusive.

Still, it can’t hurt to leave the radio on for your green friends.

My personal thoughts on the benefits of talking to plants

I don’t talk to my plants because they don’t engage with me. My rabbit pretends to love the sound of my voice, when in fact she just likes either food or getting her head stroked.

At least she makes the effort.

I’m openminded. I am about most things. Ever since I discovered as a young child that cows don’t produce milk naturally and we don’t need to drink it for the health of our teeth I vowed to listen to other people’s point of view, provided what they have to say doesn’t hurt others.

I largely take the view that people that take the time to talk or sing to their plants are just…taking care of their plants better. I read about a lady that had a MASSIVE yucca. She claimed it grew so big because she’d sing to it during its weekly leaf cleanings.

Now, call me a cynic but is anyone else convinced that she’s just an incredible plant parent?

SHE DUSTS THE LEAVES OF HER PLANTS EVERY WEEK

My plants are lucky to get dusted on a monthly basis. It’s very important that we keep the leaves of our plants dust-free (click here to find out why), but most of us aren’t as meticulous about it as perhaps we should be.

There are so many people saying that they talk to their plants every week. Do you know what the majority of house plant owners do to their plants weekly? NOTHING. Or in their panic to take care of them, water them every week, regardless of how they look.

I believe that the most important aspect of plant care is taking the time to look at your plant and what it really needs. If you’re singing to it, you’re caring for it, and will probably take more notice of it.

I hope this doesn’t come off that I’m sceptical of people who talk to plants. Far from it. When I get a bigger house I will absolutely include my plants in the conversations I have with the rabbit.

If you want to talk to your plants, please go right ahead.

If they talking itself doesn’t benefit them, your proximity to them may do, because you’re more likely to notice if they need watering or are infested with aphids.

Also, if I ever win the lottery, I’ll definitely invest in more research in this area. Imagine applications! We could massively increase the yield of our crops just by talking to them!

No longer will our kids have to work in cafes and shops on the weekend – they can stand in a field and shout at wheat! If the weather’s good it sounds like a SWELL job.

Was this a largely pointless post? Yes. Did I have fun writing it and imagining myself shouting in a field? HELL YES.